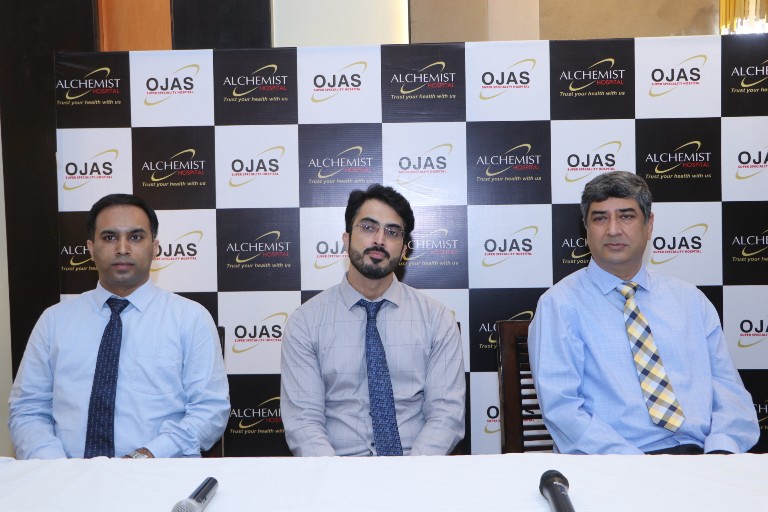 Addressing the media person Dr Col Amandeep Singh  said “Thromboembolic Stroke and Aneurysms are emerging as a major problem in India with 1.5 to 2.0 lakh cases of Aneurysms reported across the country every year out of which 40 % are life threatening.  The actual numbers are bound to be higher as many of these patients never reach health care facilities. The advance treatment of these aneurysms is possible by neuro-interventional techniques using Coils and Flow Diverters. Very few centers are offering this form of treatment in the country. There are fewer than 50 centers in the country offering this and Alchemist Hospital Panchkula is one of them to start this in Panchkula Region. This form of treatment does not involve a big scar or operation and can be done through a small hole in the groin.

The Neuro-interventional surgery is a very advanced and relatively new field and there are less than 100 specialists in this country. Alchemist Hospitals Panchkula is one of the few hospitals in this region having this super-specialty with one of the most experienced team of doctors in Neuro Sciences.

Speaking on this occasion Dr Manish Budhiraja said that Intracranial bleed or bleeding in brain is mainly due to hypertension aneurysm rupture & AVM bleed with other way causes.

Aneurysm is a condition in which normal blood vessels balloonss out and its wall become thin and ruptures. AVMs are abnormal bundle of blood vessels which can rupture due to intract weak walls.

Previously we had only single option of management i.e open surgery , but now for past few years, Neuro interventions has come up with a boon in the favor  of minimally invasive technique of tackling these complicated issues.

We here at Alchemist Hospital are very well equipped with all the latest techniques, equipments all the advances for surgery as well as Neuro intervention and have separate Neuro ICU and being one of the pioneers for Neuro Interventions in this region and have treated many cases successfully in the past years.

Speaking to media on this Occasion Dr Gourav Jain said Brain Stroke is of two types: Ischemic and Hemorrhagic. Ischemic stroke means that the blood supply to a portion of brain is cut off due to a clot with resulting brain damage. It is similar to heart attack where blood supply to a part of heart is blocked and that’s why it is also called BRAIN ATTACK. The other type is hemorrhagic in which there is bleeding in the brain.

Now with a new technique called “Mechanical Thrombectomy” which is available now in Alchemist Hospital Panchkula , these patients can be treated up to 6hrs and in selected cases till 24 hours. In this technique the clot is either aspirated or taken out of the brain with the help of a stent without opening the brain.

Sharing his views Dr Manish Budhiraja said that “The important thing about Hemorrhagic stroke is that time is of essence. If these Aneurysms are not treated in time, they can burst again and can cause death of the patient. So, patients should be rushed at the earliest to the nearest Neuro Sciences center having both Surgical and Neuro Interventional back to treat this kind of emergency. For treating such Medical emergencies, a multidisciplinary team comprising of emergency physicians, neurologists, interventional neuro-radiologists, neurosurgeons, anesthetists and critical care physicians is must. In addition to this dedicated and trained nursing care and physiotherapy is important. Also, the hospital needs to have inhouse CT/MRI machines of good quality to diagnose the cause of stroke and to take treatment decisions at the earliest. In Indian cities including Metro cities, not more than 50 Hospitals throughout India are offering treatment of Hemorrhagic stroke by Neuro Interventions.

Important things to Know about Hemorrhagic Stroke/ Bleeding in Brain
1 Sudden severe Headache, typically called worst Headache of Life.
2 Frequent Headache associated with double vision, numbness of face and pain behind Eyes.
3 Don’t give Aspirin or any other Blood thinner, without getting an urgent CT scan.
4 Keep a close watch on Blood pressure levels of patient while shifting to Tertiary Hospital.
5 Increased Blood Pressure and Smoking are Major risk factors for rupture/ bleeding of Aneurysms.