Chandigarh
26 March 2017
DIVYA AZAD
Today, at about 11 am, the final match of a Cricket Tournament (an anti-drug campaign) was played between Infosys Limited and Police Station of IT Park, Chandigarh at Police Lines Ground, Sector-26, Chandigarh. The team of Infosys Limited won the same. The SSP/Chandigarh was the Chief Guest of the occasion.
The Infosys won the toss and chose to field first. The team of PS-IT Park, Chandigarh, under the captainship of Insp. Rajeev Kumar, SHO/PS-IT Park, Chandigarh scored 116 runs in 12 overs. Const. Gopal of team PS-IT Park, Chandigarh made 65 runs with the help of 8 sixs. On the other hand, the team of Infosys, under the captainship of Shri Nikhil Valecha made 119 runs in 11 overs. The each member of winner team has been awarded with a cycle and trophy whereas each member of runner-ups with trophy, track-suit and bat. The const. Bhupesh of PS-IT Park team was announced as man of the series. 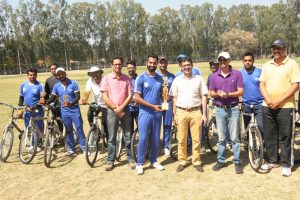 This cricket tournament was organized by the police station of IT Park, Chandigarh in collaboration with some IT Park Companies from 24th of March to 26th March 2017 as an Anti-Drug Campaign. Therein, total 16 teams participated including of Indira Colony, Subhash Nagar, Kishangarh, Shastri Nagar, Mani Majra Town, IT Park Companies and Police Station Mani Majra & IT Park, Chandigarh. All teams were divided into four pools and on 24th of March, total 8 league matches were played at different grounds in Subhash Nagar and Sketri. A knock out system (single-elimination) was introduced. Accordingly, on 25th of March, total 04 matches were played as quarter finals and on the same day, 02 semi-finals were played.  A hard Tennis Ball was used for each match restricted to maximum of 12 overs.
This was an effort to curb drug menace and to generate healthy/positive competitive ideas in our youth with a slogan “SAY NO TO DRUGS”. The Drug abuse is a terrible problem we face in our society and it is a fact that physical activity may prevent substance abuse. Physical activity can strengthen resistance to addiction. Perhaps students/youths who choose to exercise tend to make healthy decision in general.