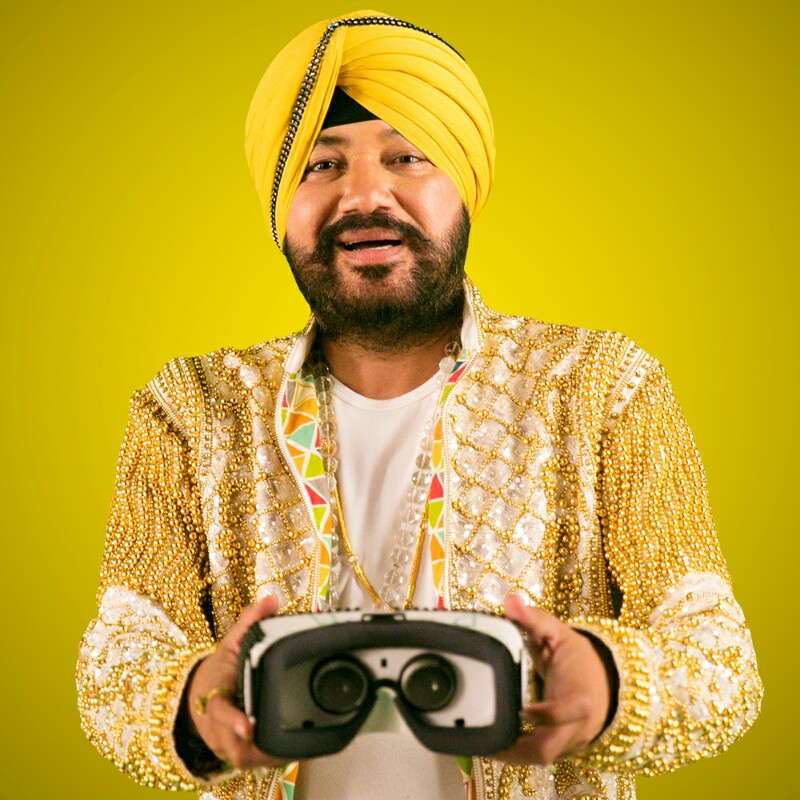 Bollywood’s pop king Daler Mehndi will be releasing India’s first VR music video at the 2017Samsung Developer Conference in San Francisco.  The conference will be held at the Moscone Center in San Francisco on October 18-19.

Samsung strives to make new technology and exclusive experiences accessible to all. This collaboration is no exception as it is a step in making VR popular in India.

“I am proud to partner with Samsung and bring such a new and exciting entertainment experience in my country” said the iconic musician. Mehndi has always believed in making unique and path-breaking content that takes the entertainment industry forward. In 1998, the video for Mehndi’s song “Tunak” was the first video to be made in India using green screen technology, which allowed the singer to superimpose his image over various computer-generated backgrounds.

The pioneer of Indian Pop adds another first to his turban by being the first Indian artist to have made a music video using VR. Daler Mehndi’s music has had a pied piper effect on listeners over the years, the man with long flowing robes, bejeweled turban, power pitched voice and simple catchy dance steps – has this unique ability to get people across age, cultures, faiths, countries dancing.

‘Jaan Meri Dance Karle’ or simply ‘Dance Karle’ is an energetic, foot tapping Bhangra song full of joyful splendor. The song with simple Punjabi lyrics emphasizes on overcoming everyday difficulties by being upbeat. The singer advocates that Happiness is infectious and it makes the world join in, so dance away your blues through the dreary situations of everyday life.

The introductory visual of the song ‘Dance Karle’ is a sadhu playing an Indian rhythm instrument “Dumroo” setting the ground for the philosophy of the song that life is a circus, the ringmaster is the one that juggles our lives with varied experiences throughout its term, and although our destinies are pre ordained – the good and the bad, the ups and downs should to be lived with love and happiness. The various characters in the video cover a spectrum of socio economic cultural environment like the colorful kalbelia dancers of Rajasthan amidst the sand and the camels, the common people at old delhi against the backdrop of the majestic Jama Masjid Mosque around the chaotic streets of old Delhi, the monks in ladakh, the street acrobats -fire dancers living their lives supported by their craft over measly earnings threaded together by the song, the singer and happiness.

“The title of the song and its tune is composed by my 3 year old daughter Rabaab. These words are hers. I had caught her singing these to herself over and over. Simple and catchy I decided to record it. The final outcome is uplifting and motivating. I am unabashedly saying that I love it,” reveals the singer.

“The idea is for the viewer to feel as though they are right there with me and get a 360 degree experience. The technology is at its absolute nascent stage in India and to attempt a music video was both enthralling and challenging. With no video assist and no director in front of you… it was quiet weird and different. It took a while to grasp it – the camera was placed at a certain height, the camera or the production team would all run away as soon as the director announced action and the dancers who were spread out far away had to all perform brilliantly. Unlike my other videos, here I felt I had no control and no idea as to what would come out. To add to the woes was the heat at that height, the humidity and the fear of rain. This is my first such video experience. However the director and his team tried their best to put together a music video which had to match the pace of the song yet restrain to accommodate the technical limitations of this format.  I have loved making this powerful song and hope people like the video. You have to see the video on the VR gadget and it gets a little heady if you don’t sit and watch it. The best way to view the video is on a revolving chair as you can easily rotate and move your head up and down, left and right. Unlike my other videos, you can’t dance watching this one. This video is just to experience it spatially. It has been an adventure for me. ”said the Artist.

The 2017 Samsung Developer Conference will provide a glimpse into the future product innovations from Samsung and its partners. It brings together thousands of developers, technologists, business leaders, innovators, designers, and content creators to network and learn about the next wave of intelligent technology.

Get transported into the world of music with oraimo’s new range of...