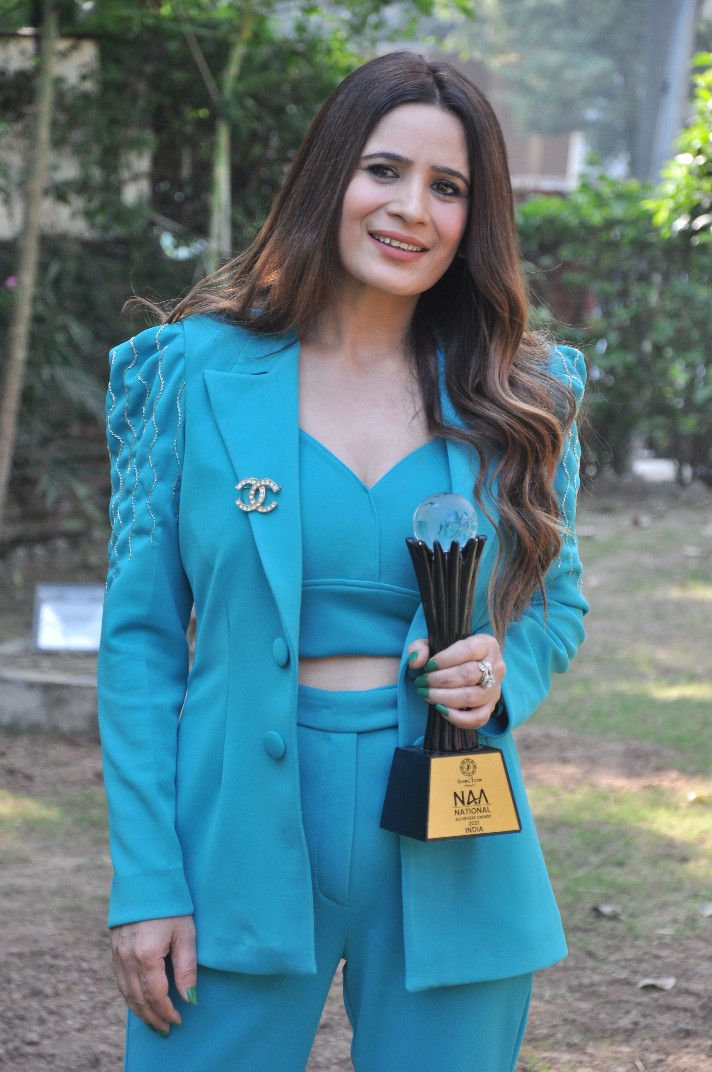 City based fashion designer Anjali Sharma has won the prestigious ‘National Achievers Award’, she was felicitated with the title of Best Fashion Designer(Chandigarh) an award category under ‘National Achievers Award’ recently in capital New Delhi. The trophy was handed over to Anjali by the famous TV & film actress and Bigg Boss fame celebrity Hina Khan. Anjali has designed for many Punjabi films like ‘Manje Bistre’ and ‘Mr & Mrs 420’. She has also designed for many Punjabi stars like Gippy Grewal.

Anjali said, “I feel elated on winning the ‘National Achievers Award’. Whatever design I create, I try to keep it as unique as possible. The first achievement is when people start appreciating your work. And I am so happy that people love my designs as that in itself is a huge win. My style of designing clothes is basically that everyone should look like a celebrity after donning my designs. I am also thankful that my work has been acknowledged at a national level.”

It is noteworthy that Anjali Sharma  founded  the fashion label Ujjayra Bespoke in 2009.

Anjali is popular among  fashion enthusiasts for her niche in pure western & Indo Western wear designs. Earlier there was a scarcity of pure western wear designers in the city, this void was filled by Anjali’s designs and it is because of her creative work in this fashion genre that she got recognized by the research team behind the awards. She was nominated among many other fashion designers and was later adjudged winner.

Anjali further said, “We have a wide range western designs like ruffle tops, jump suits, party dresses, gown dresses etc. As I like to experiment with my work, we also have a ‘lungi skirt’ which is appreciated by a lot of my clients. As it has its own uniqueness to it. I mostly design for occasions like cocktail parties, weddings, receptiona, kitty parties and more. Our ‘Lady blazers’ are also famous amongst fashion lovers who like a chic and classy look. I also try to guide clients as to which footwear to wear and how to accessorize with the outfits so that it brings out the best in them. Often people choose the wrong jewellery or footwear which dulls the whole look.”

The USP about Anjali’s designs resides in her unique cuts, silhouettes and foreign styling. Her designs are famous for her special touch as all the fabrics used in designing clothes are imported. The clothes designed have intricate detailing with pearls, cut daana and sequins. Along with the western wear designs, there is also a vast range of Indo-western wear but with a distinctive western touch.

While talking about the winter party fashion trends, she said that velvet based dresses, experimentation with Indian brocade with a western touch, co-ord sets and creatively designed corsets are going to be popular. Gown dresses too will gain prominence in formal occasions.

Elegant and Confident Ladies are set to walk the ramp for...