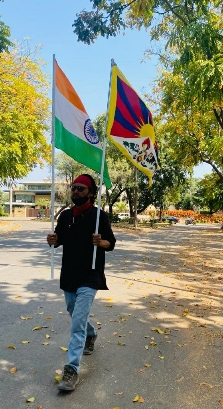 47-year-old Tenzin Tsundue, a revolutionary, poet and writer striving for Tibet’s independence  arrived in Chandigarh after traveling nearly 250 km from McLeodganj (Dharamsala) on Thursday. He was traditionally welcomed by the local Tibetan students and families at Chandigarh Press Club, Sector 27. On his walking mission = ‘Walk a Mile for Tibet’, Tenzin is enroute to New Delhi for a total distance of 500 kilometers to make people aware of the intricacies of Sino-Indian relations and the dangers posed by China to India. Tenzin started his journey from Tibetan New Year ‘Losar’ i.e. Feb 12 and will conclude on 10 March on Tibetan National Uprising Day. Tenzin said that the Indian Govt and Indians have to understand these important issues for the future and in this direction, the solution of Tibet is necessary to safeguard the Indian border.

He said that during his one-month padyatra, he is requesting people to sign a petition urging the Government of India to repeal its current India-China policy. This campaign is also being strengthened through online, which will not only be limited to India, but will be converted into a global campaign.

He said that India should abrogate the ‘One China Policy’ as China has been consistently asserting its claims on Arunachal, Ladakh and some parts of Sikkim which is wrong. As a result of China’s aggressive attitude towards India and the support being given to Pakistan, a large part of India’s hefty annual budget (nearly 55 billion dollars)  is being spent on the army of. If India recovers from this budget, it can spend it in the development of the nation.

Seeking support from the local Indians, Tenzin said that they can contribute to the Tibet independence movement through articles, poems, webinars, talk, cartoons, blogging and other forms of social media campaigns