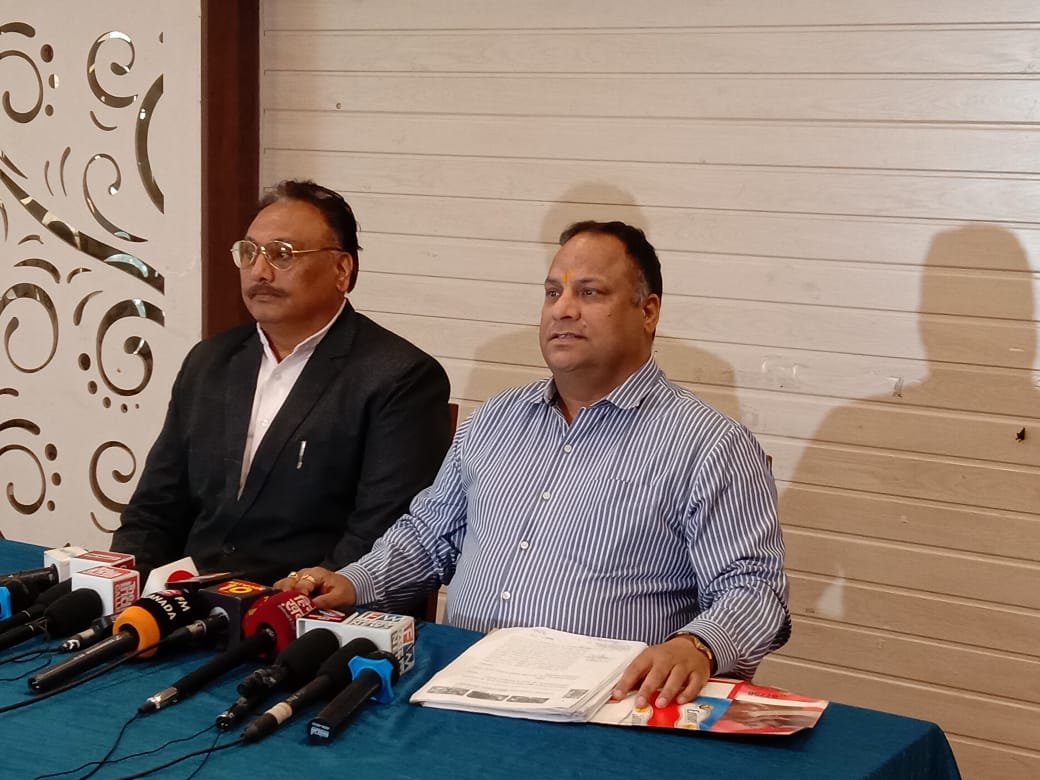 Local BJP leader Subhash Sharma has filed a defamation claim of Rs 10 crore on NRI Naresh Kaushal, refuting the allegations of fraud of Rs 2.23 crore leveled against him by Naresh Kaushal. Apart from this, Subhash Sharma has also filed a complaint of harassment and blackmailing against Naresh Kaushal as well as his father Sukhdev Raj Kaushal and brother Anil Kaushal to Chandigarh Police. He has asked the SSP to take immediate action on this and an FIR should be registered against these three thugs.
In this regard, while giving the above information to the journalists in a press conference organized at Chandigarh Press Club today, Subhash Sharma, who has been doing property dealing work for the last several years, told that Naresh Kaushal has sold two properties and has bought one through him till date. Registries of these have been already done after completing all their transactions.

Despite this, Naresh Kaushal has looted crores of rupees by putting a case of payment arrears on the involved parties and now he is registering false cases to extort money from him (Subhash Sharma) while Naresh Kaushal on the contrary still have to pay him 23 lakh rupees worth of his commission.
Subhash Sharma told that Naresh Kaushal takes the help of the police of Mata Mansa Devi Complex Police Station for fraud and blackmailing. Because in their knowledge, against whomever the cases have been registered, they were registered in this police station and were harassed by the policemen of the same station and money was recovered by getting compromised by intimidation. According to Subhash Sharma, Naresh Kaushal did not even leave his father and real sister and collected Rs 75 lakh after getting a complaint registered against them in the same police station.

Subhash Sharma further told that the case in which Naresh Kaushal has filed of liability of 2.23 crores on him and the buyer regarding the property deal, Naresh Kaushal himself has given an affidavit on the day of registration of property i.e. 05/08/2020 that he has taken full payment of his share. He told that at first, Naresh Kaushal had made a case in the consumer court accusing him of not providing proper service, which later he himself took it back. After this he put another case against him. to Chandigarh Police on 14/10/2020 in which the police after full investigation gave full report on 28/02/2021 that the complaint is false. After this, Naresh Kaushal has now put this fresh case. According to Subhash Sharma, Naresh held a press conference in the past and accused him as well as Himanshu Sharma and Apoorva Kant Rampal of retracting from the liability of money, but he could not show any proof in this regard. He told that Naresh deliberately kept this press conference at the time when he was in London for some work so that he could not deny it nor present his side before the media.

Subhash Sharma said that the MDC police station though has registered the case under section 406/420, but it is surprising that on the basis of which investigation the police have done this. He said that till date he has never received any call from MDC police station for questioning. He also told that six people are named in Naresh Kaushal’s complaint, but the case has been registered only on two.

Subhash Sharma alleged that Naresh Kaushal, in connivance with the MDC police station, has taken crores of rupees by blackmailing people and is now after him. He said that he will take full legal action against Naresh Kaushal and under this he has filed a defamation claim against him today. Apart from this, they are also going to file a writ in the High Court against the criminal exploits done by Naresh Kaushal and will demand to set up an inquiry under the leadership of a senior officer.

Ahead of Republic Day, JD Institute of Fashion Technology conducted Seminar on...