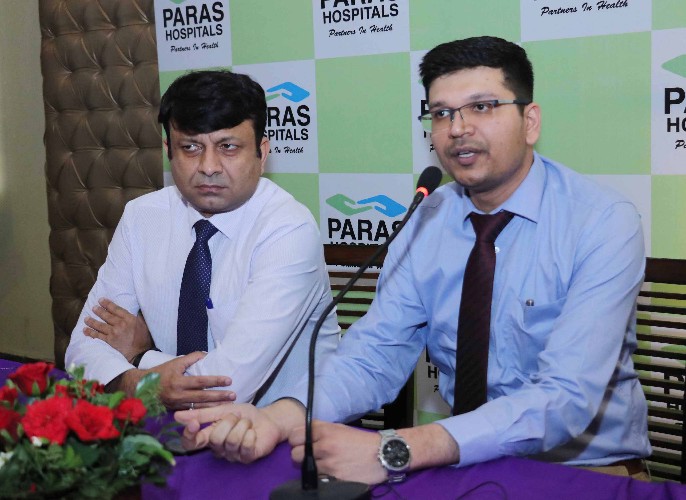 To Create awareness on “Obesity & its Health Hazards” a team of Doctors from PARAS Hospitals Panchkula,  addressed the media person today. Speaking on the occasion Dr Anupam Goel , Consultant Bariatric & Laproscopic Surgery from Paras Superseciality Hospital Panchkula “A recent study puts an alarming 70 percent of India’s urban population in the obese or overweight bracket taking the country right in the middle of a fat explosion.”

Dr Anupam Goel shared that according to a study published in the noted journal Lancet, India is just behind US and China in this global hazard list of top 10 countries with highest number of obese people. Also as per a recent report Obesity’s global costs hit $2 trillion a year.  30 million of India’s adult population is either overweight or obese and 62 million diabetic  Indians exhibit unique features of obesity like excess body fat, abdominal adiposity, increased subcutaneous( under Skin) and intra-abdominal fat, and deposition of fat in ectopic sites (such as liver, muscle, and others). Obesity is a major driver for the widely prevalent type-2 diabetes & Other commonly associated diseases are Obstructive sleep apnoea, Osteoarthritis, Low self esteem, Depression, Menstrual irregularities, Infertility, Hernias, Cancers and Heart Failure.

Dr Anupam said “It is a common myth that, “Obesity is a rich man’s disease”. In reality, obesity is not only caused due to over-eating but also due to adopting wrong eating habits. Therefore, obesity can affect both rich and poor altogether.

Losing even 5-10 per cent of your weight can delay or prevent some of the diseases discussed above. These results can often come from fitness centers, dieticians and nutritionists. But, there are conditions when surgery alone is the best option to deal with obesity. Patients can undergo Bariatric surgeries that either restrict eating or leading to decreased absorption of food that you eat. In Gastric Bypass surgery, the capacity of the stomach is reduced by stapling the intestines to create a smaller pocket of the stomach. These operations are done by laparoscopy and are keyhole surgeries. Patients those who undergo Bariatric surgery within five years of the onset of diabesity, there is a 90 to 95 per cent chance of them getting cured of both diabetes and obesity.. Dr Anupam also shared that Obesity is rising in India. So are weight-loss surgeries. About 18,000 weight-loss surgeries were conducted in India in 2014, up from 800 just five years ago. India’s government now covers the cost of weight-loss surgeries for its 3 million government employees, making the procedure available for the not-so-rich as well.

On this occasion, Ashish Chadha, Facility Director PARAS Hospitals Panchkula said that Diabesity (diabetes + obesity) is prevalent in 60 per cent of diabetic patients in India, out of which around 25-30 per cent have a  high BMI index of more than 30. Nearly half the world’s adults will be overweight or obese by 2030 should present trends continues. As the risk factors of Obesity & Diabetes increases, so does the mortality rate. He added, “The current scenario demands an immediate emphasis be laid on preventive healthcare. This involves raising awareness about the disease and its risk factors. Conducting public education programmes, workshops and counseling sessions for creating awareness at a mass level. About Obesity & its side effects”