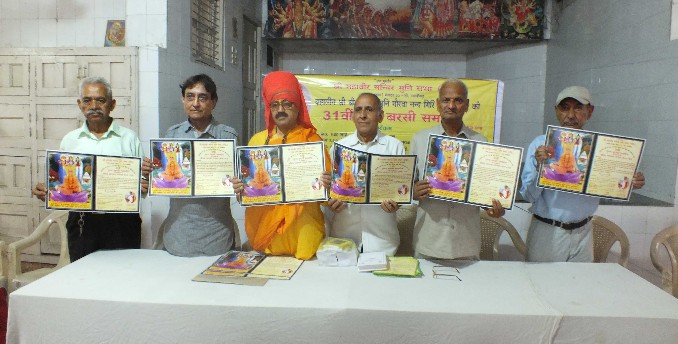 Giving information about other programs on this occasion, Daleep Chand Gupta President, Sri Mahavir Mandir Sabha and Pt. Deep Sharma informed that on July 6, Shrimad Bhagwat Katha Giyan Yagya to start with a grand Kalash Yatra on the same day at 9.00 AM before the yagna. Kalash yatra to start from Sanatan Dharma Mandir Sector 23 and would be passing through different places of this sector and will reach Shri Mahavir Mandir Muni Sabha where katha will take place. The women’s Sankirtan Mandals of the Sadhu Ashram Mahila Sankirtan Mandal and other various temples will also join the other devotees in the Kalash Yatra.

Secretary General of Sabha NS Chauhan told that Katha Vyas Shri Atul Krishna Shastri ji from Pathankot / Vrindavan will commence Shrimad Bhagwat Week by reciting Shrimad Bhagavat Mahapuran from 5:30 to 8:30 pm. This discourse will continue till July 12. He said that on 12th July at 6 am Prabhat feri will be organized at Sector 23-C and D, then after 7:30 am Havan will be done. After which the bhog of katha will held by worshipping of thousands of invited saints, Mahatmas. Later bhandara will be held for general public.

Pandit Deep Sharma, while highlighting the life of Brahmleen Shri Satguru Dev Shri Shri 108 Shri Muni Gauravanand Giri Ji Maharaj, said that Shri Muni Maharaj had sacrificed food for 26 years and had kept silence for 16 years and visited numerous pilgrimages of India. After that he reached Chandigarh in Sector 23 and constructed a cottage which was called Muni ji’s cottage by all the devotees. After reaching here he felt that there should be a convenient place for Saint Mahatma and poor people and other travelers. First of all, a shade was built, in which free arrangements were made for the stay of the saints and poor people and travelers. Under this thought, he laid the foundation stone of the temple by the hands of M. S. Randhawa, former Chief Commissioner, Chandigarh, and established the statue of Shri hanuman ji in this temple. After which the other forms of God were established by Shri Muni Sabha. After which he constructed a Dharamsala in 1978 whose foundation was laid by the hands of Chief Minister of Punjab, Giani Zail Singh, Minister of Excise and Taxation, Punjab Yash, Haryana Minister Pt. Chiranjeevi Lal Sharma, Chief Commissioner of Chandigarh TN Chaturvedi and Congress Committee President P. Kedarnath Sharma. Muni Ji had said that he has laid the foundation stone of this Dharmshala by five beloved ones.