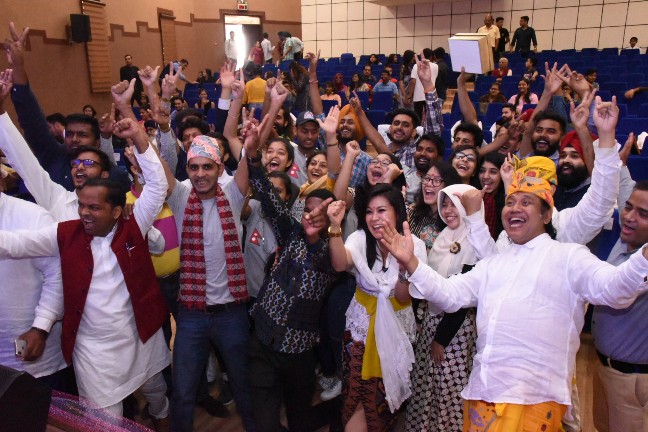 The 13th Global Youth Peace Festival-GYPF2018 kicked off here today with a clarion call to the 250 odd young people assembled from 30 countries to forge youth partnerships for a better world so that we do not miss the target of achieving the sustainable development goals by 2030.

Delivering the keynote address at the inaugural event, Bernie Meyer, known as the American Gandhi, who is also the brand ambassador of GYPF said the challenges of sustainable development have to be met with a creative response.  “We can all learn a lesson from the life of Mahatma Gandhi who met the challenge of discrimination involving being thrown out a first class compartment in a train in South Africa with a creative response which we now know by the name Satyagraha,” he said.

Bernie, who has been coming to the GYPF for several years now talked about challenges like climate change and the proliferation of nuclear weapons that is endangering the planet earth and said youth must come together in a global partnership to ensure that we leave a better planet for future generations.

Advocate General of Punjab, Atul Nanda, who was the Chief Guest for the occasion, said young people today have a choice to work for a better future for everyone on planet earth. “Unlike earlier times when decisions were forced upon the young people, today they have a lot of exposure to the world through social media and other networking channels. It is the responsibility of the youth to harness this positively instead of failing prey to misinformation and fake news,” he said.

Quoting Bhule Shah, a sufi poet from Punjab, he said internal engineering was as important as making positive changes in the world. He exhorted the young people to work with a pure heart and open mind.

Tanya Shanti Spisbah, Head of Strategic International Engagement at the University of New South Wales (UNSW), Australia, said solving problems in a spirit of camaraderie without falling prey to conflict borne of the ego is very critical to harbouring a new approach that can bring peace in the world.

Sharing some of her life lessons with young people, she said being open to working with others and not always aiming to want your way is the first step in relating to the world differently. She hoped that the young people will acquire peace building and conflict resolution skills that comes from a heart-to-heart dialogue that the young people have an opportunity to forge in forums like these.

T.C. Nautyal, Member Secretary, Chandigarh Pollution Control Board and Conservator of Forests, Chandigarh Administration said young people have a role to play in cleaning up the environment and mitigating the impact of climate change.

On the occasion, prominent youth leaders from around the world were given the global youth leadership awards. These included Suresh Thakur from Nepal, Matin Ahmed and Fahm Shehriar from Bangladesh; Nageswary from Malaysia; Ali Fayez from Afghanistan; Aneet Aklesh Kumar from Fiji; Hiranya Hazarika from India; Wayan Sari Dika and Clarissa Amadhea frim Indonesia; Masago Roderick from Zimbabwe; Jamal Adam from Sudan; Joachim Kavishe from  Tanzania; Sahan Jayaneththi from Sri Lank, Edwin Kok from The Netherlands and Chen Tai Wei from Taiwan.

Other highlights of the inaugural ceremony included national anthem by students of Carmel Convent School, Chandigarh; a cultural program by artists of the North Zone Cultural Centre and writing messages on My Pledge Wall.

In the afternoon, Ashish Bipin Shah from Wild Ecologues, led a session with the young people on environmental sustainability and biodiversity conservation. Dubbed the global earth summit, this involved the young people talking about what they can do to improve the environment in their own country. These sessions were moderated by Bernie Meyer, Tanya Spisbah and Agus Indra Udayana of Ashram Gandhi Puri, Bali, Indonesia. Tomorrow, a small group will learn how to conduct sustainability audits to reduce the carbon footprint and increase the sustainability handprint.

Pramod Sharma, founder of  Yuvsatta and organiser of the 13th GYPF said that the festival will continue over the next two days with a day-long interactions among young people at the Indian School of Business (ISB), Mohali Campus; a One World-One Sky Kite Flying competition and a Wildlife Conservation Walk on October 2 on the occasion of the birth anniversary of Mahatma Gandhi.