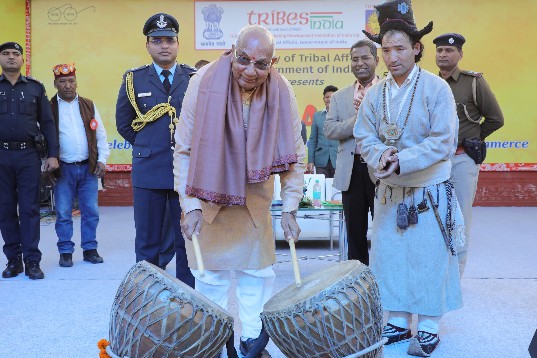 His Excellency, the Governor of Haryana, Professor Kaptan Singh Solanki, formally inaugurated the festival at 5 pm here today by lighting the lamp. The ceremony was followed by playing of the National Anthem.

The Governor took a round of the venue an interacted with the artist and lauded their significant role in the protection, preservation and promotion of the rare folk art and craft of the country and also patted the host TRIFED for offering them platform to showcase their artistic creations to a bigger and wider market. The Governor said the TRIFED was doing a wonderful job by holding such purposeful programmes across the country to connecting people and integrating India.

Giving sidelights of the Aadi Mahotsav, the TRIFED Managing Director, Mr Pravir Krishna, said “The theme of the first-of-its-kind festival in tricity is ‘A celebration of the spirit of tribal culture, craft, cuisine and commerce’, which will roll out a spectrum of  the rare folk art and craft of their respective states. Acclaimed artists and artisans, drawn from as many as 25 states of the country, including Chhatisgarh, Madhya Pradesh (MP), Odisha, Himachal Pradesh, Jammu & Kashmir, Rajasthan, Gujarat, Andhra Pradesh, Karnataka, West Bengal and North-East states are a part of this mega cultural razzmatazz and showcase their traditional art, craft and culture. We are holding Aadi Festival across the country. The first event was organised in Delhi where Vice President of the country was the chief guest. He patted the hosts TRIFED and advised them to hold such festivals in every state of the country.  The fifth in the series is being organised in Chandigarh” He said

Mr Pravir Krishna further added  that TRIFED is engaged, heart and soul, in ameliorating the lot of small and marginal artists and artisans by inviting them to such mega cultural event and offering them space and genuine price of their product from the buyers. This also helps them to get rid of the middlemen usurping their profits.   He also elaborated that for the first time, the tribal merchandize payments will be accepted through credit and debit cards in line with the national aspiration to go cashless.

“Aadi Mahotsav, an initiative the unique festival will offer an opportunity for the incurable shoppers, likely to show up in their thousands from distance corners of the tri city and its neighboring states of Punjab, Haryana and Himachal Pradesh, who would have a lot to choose from a range of handloom, handicraft, ethnic jewellery items, and designers’ crockery items from as far as Jammu and Kashmir in the North, Tamil Naidu down South, and Gujarat in the West and Nagaland/Sikkim in the East. The traditional tribal jewellery, rare of the rarest craft items and artifacts will be a huge attraction for the inquisitive buyers.

The hosts have gone a step further to create an ambient backdrop to go with the theme of the festival. Entry gate to the venue has been tastefully designed as per the theme of the season with its walls bearing mural paintings depicting the recurring tribal themes. Food Court consisting of 10 tribal food stalls from various states of the country offering a rich fare of traditional Indian cuisines and culinary delights, where foodies will have a date with their the delectable delicacies.

The organizers further added that star artistes from various states will give their scintillating performances in the evening segment during the festival and keep the visiting music lovers hooked to the musical blast and savour the typical folk tunes of various regions. The spectacular cultural bonanza will offer a string of fascinating folk songs and dances and folk musical instruments/accompaniments from various part of the country will keep the visiting buffs enthralled in the evening segment of the festival, daily, from 6 pm, onwards.

In the evening segment today folk songs and folk dances of various states were performed. The Layul Sur Sangam, presented ‘Garfi’, a popular folk dance of Himachal Pradesh. This was followed by a host of folk and tribal dances from Leh-Ladakh, Haryana and Punjab, which were greatly appreciated by the audience. Satvir Bugga and Jarnail Bugga and troupe gave their powerful performance.   Mahabir ‘Guddu’ from Haryana presented ‘Bhamb Lehri’ in his inimical style.