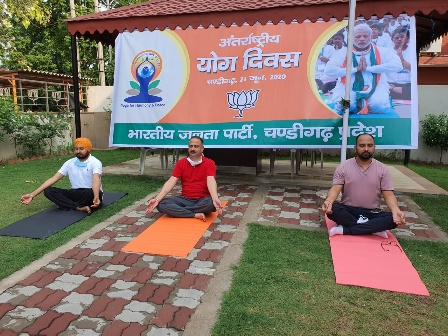 To mark sixth International Yoga Day, a Yoga camp was organized by the BJP Chandigarh at the party office- Kamalam Sector 33 on Sunday. This camp was attended by many officials including party state president Arun Sood.. Yoga instructor Monika Thakur conducted the camp wherein she imparted many Asanas. This program was also broadcast live on social media to benefit people sitting back home.

While congratulating residents on the occasion, State President Arun Sood said that yoga has a centuries-old bond with our country. Our ancestors put themselves through yoga on many important aspects like meditation, tenacity, longevity, healthy body etc. He added that “It is due to our ancestors that this knowledge can be overcome with severe illnesses. Today, the world is also accepting the power of Yoga. Thanks to our worthy Prime Minister Narendra Modi who gave a new dimension to Yoga globally. Now millions of people from all over the world are celebrating this day as Yoga Day which is indeed a great achievement for our countrymen as our knowledge is gaining fame internationally. Not only the fame but the strength to fight the terrible diseases from it started increasing in our body.”

People during the occasion pledged to do yoga daily in their homes from today onwards and said to inspire other people in this noble cause. State President Arun Sood also expressed special gratitude to Yoga instructor Minakshi Thakur that he taught and taught various yoga postures.

Beat the Heat this summer with Bestech Mall