The chain of spreading TB has been broken in Chandigarh. It has been possible to control the spread of TB with planned and sustained efforts with the aim of early detection & early diagnosis, said Dr Rakesh K. Kashyap, Director Health Services, Chandigarh while inaugurating the Fourth Treatment Unit at Civil Dispensary Dadumajra on occasion of World TB Day at CD-Dadumajra today.  Patients will start getting free treatment of TB at Civil Dispensary of Dadumajra. Patients will not have to go far off to get their sputum examined and for taking medicines. He informed that in near future, Govt. of India will introduce daily medicine regimen under DOTS instead of alternative day treatment.

He said that due to awareness about symptoms of TB, availability of diagnosis and free treatment, there has been a considerable decline in incidences of TB in Chandigarh. Having treated more than 37,600 TB patients,  health department has been able to control the spread of TB and is working hard to eliminate the disease from the City Beautiful .With the  implementation of DOTS Plus Programme, Multi-drug resistant  TB patients have been able to get treatment of TB and lead a better lifestyle.

DHS congratulated the programme Managers for securing 1st position amongst all the UTs of India in performance for TB Control. He advised to concentrate on slum areas which have more number of TB patients and intensify the Campaign to educate the people about early diagnosis and complete treatment which is available at their door-step.

This achievement is significant which has been possible with the co-operation of various segments of Society like IMA, NGOs/NIMA Doctors, School Teachers, Social and Religious organisations.

State TB  Officer, Dr. Rajiv Khaneja appreciated the efforts of Health Providers who are the pillers of the RNTCP Programme.  They help not only in reducing default rate but also motivate chest symptomatics for sputum test. He appealed to the residents of Dadumajra  to make full utilization of newly inaugurated  Treatment Unit.

He added that now new techniques like CBNAAT used for early detection of disease are available in Chandigarh.

An Educative play was enacted by Nursing Students of PGIMER.

DHS honored the best workers and gave prizes to the students for painting competition organized in schools on Tuberculosis etc.

STO Thanked the Chief Guest and people of the area, as well as health services providers. 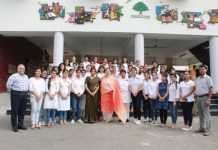 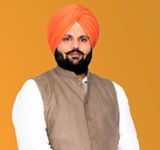 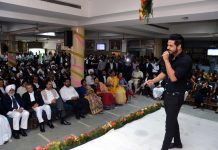 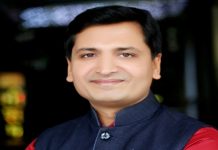