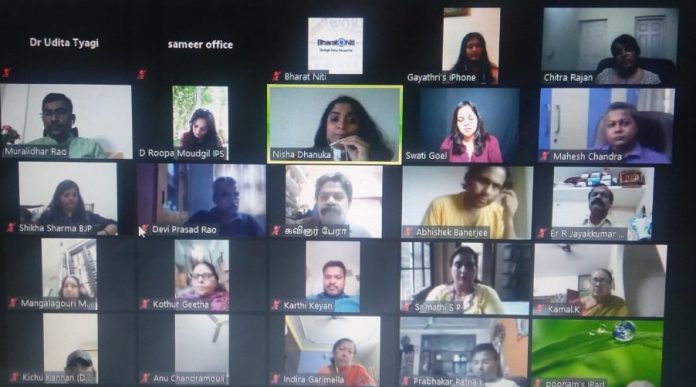 A unique webinar on “Social Media & Women” came off successfully. National co coordinator of the public policy making platform Bharat Niti  Gaurav Goel, along with Sameer Chakoo organised a webinar to spread the awareness about privacy protection and equal opportunities to women on Social Media. Many eminent scholarly women participated in this webinar along with 1300 other participants.

The promonent political activist Ms Malavika Avinash Ji expressed her contention for the cases that have taken place in society where women were left bereft of the equal rights as promised or the cases where the breach of privacy had taken place. Malavika Ji suggested to the women present there that if they feel there constitutional rights are being snatched away they should raise their voice and work actively to protect their rights as promised by the constitution of India.Malavika Ji said that women should not be harassed only because they raise their voice against some established norms/ entities/ institutions. She also said that this country needs enlightened women and the platform of Bharat Niti must be used for ‘privacy protection and to provide women with equal opportunities..

The main speaker Shri Muralidhar Rao, National General Secretary BJP also raised concerns about the violation of privacy violation on social media and freedom of expression for women. He said that everybody has the right to have his/her say in a democratic setup and if there is a disagreement it must be sober and decent in tone, any malignant comment should not be taken into consideration. He further said that social media has empowered even a villager so much that he can contribute directly to the democracy of the country and express his demands and concerns freely.

Later, the famous journalist Swati Goel Sharma asked for complete empowerment, privacy protection and freedom to the women in this country to strengthen the central fiber of the nation. She said that no matter how modern the society grew; still a woman has to worry about her privacy and look for equal opportunities to express her opinion. The major problem is the communist and the left Brigade that targets each and every woman that stands for her nation for her country and speaks about the interests of the country. she said that if a woman has to be empowered/ made to feel protected; she should listen to her heart and choose what is right.

Later, IG Railway Police Ms D. Roopa IPS explained by saying that the Privacy protection of women on Social Media has to be ensured because there are also people who misuse this right and due to them all other women who speak for their right, who speak for the country are disgraced. Ms D Roopa expressed her viewpoint in a forceful way where she emphasized that women can contribute in the development of the nation as good as men do, but they should be given and open platform to perform and to have their say. At the end the ideas expressed by Ms D Roopa and Ms Gayathri Raghuramm the famous actress and political activist, were very informative and inspiring. 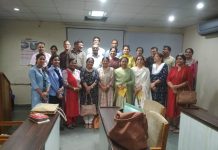 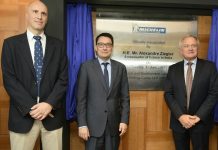 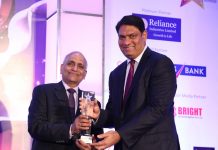 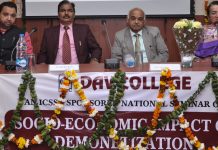