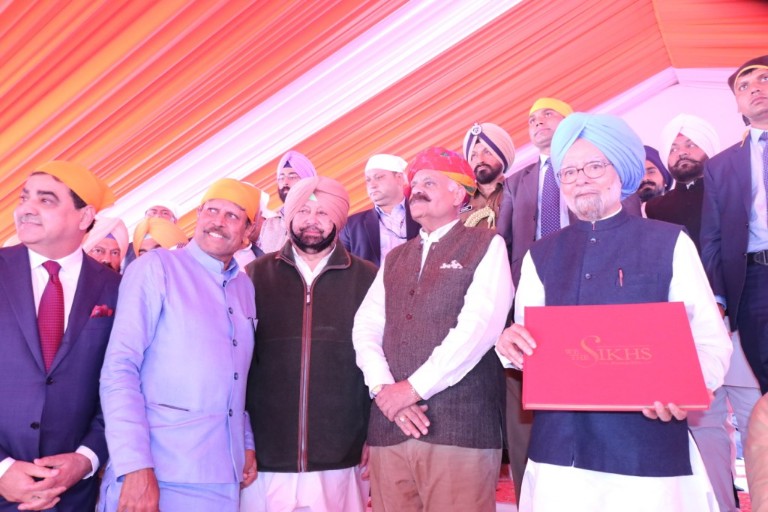 Former Prime Minister, Dr. Manmohan Singh today unveiled a coffee table book on Sikhism – ‘WE THE SIKHS’, at the kick-of ceremony function of the celebrations of 550th birth anniversary of the founder of Sikhism, Shri Guru Nanak Dev Ji at the state function at Sultanpur Lodhi. The book is curated by Ace Cricketer Kapil Dev and his associate Ajay Sethi and talks about the Sikh religion and Gurudwaras across the globe.

‘WE THE SIKHS’ is a brainchild of Kapil Dev and Dubai based visionary entrepreneur Ajay Sethi. It’s a unique coffee table book, which celebrate Sikhism through original paintings, first hand photographs and never published images. The book features three sections – The Gurus, The History and Artefacts and Gurdwaras Around the World. It brings alive the world of Sikhs, a community famous for their courage, loyalty and pure living.

Talking about the launch of the book – Dr. Manmohan Singh, Ex-Prime Minister of India said, “It gives me much happiness to introduce WE THE SIKHS, a commendable publication of KAS Holding. This is a unique book as it shows us photographs of gurudwaras from every corner of the world. This book shows how far the Sikhs have travelled and have always upheld our faith and stayed true to our values of One God, universalism and liberalism. I wish WE THE SIKHS every success all over the world.”

Captain Amarinder Singh announced the kick start of the preparations for the celebrations to mark the 550th birth anniversary of Guru Nanak Dev ji, which will stretch across the state along with other parts of the country for over a year.

Capt. Amarinder Singh, Chief Minister of Punjab said, “It gives me immense pleasure that the KAS Holding have brought out the publication WE THE SIKHS. This beautiful pictorial work focuses on different aspects of Sikhism: the life and contribution of our great Gurus, the history, artefacts and traditions, and the historic gurdwaras across the globe. For the Sikhs, the book will be a treasure trove of pictures of our gurudwaras and the community across the world. I wish this labour of love all the success.”

The book is well researched and written by Historians and photographed live by top lensmen. It features shots of over 100 Gurdwaras across the world from India to USA to London and far corners of the world. Each Gurdwara has been exclusively shot for this book. Original paintings of Gurus have been commissioned by well-known artists in India and these are featured in the gorgeously designed pages of the book.

Talking about the book – Kapil Dev, the ace Indian cricketer said, “The inspiration of doing this book came to my mind few years ago, when I visited Gurdwara Sri Panja Sahib Ji in Pakistan. I was moved deeply by the experience and decided to bring the world’s Gurdwaras together in one invaluable publication.  The book is a first of its kind of project on Indian Gurdwaras, which tells pictorial story of the Sikhs and their house of prayer. The Gurdwaras has emerged as a new edifice on India`s religious landscape and ever since then this indestructible symbol of the Sikh faith has stirred intense and indefinable feelings in millions of Sikhs across the globe. “We the Sikhs” is a privileged and proud way to pay tribute to Sikhism, The Gurus and The Gurdwaras”.

Talking about the book, Mr. Ajay Sethi, Chairman, Channel 2 Group, Dubai said, “This book is the result of an in-depth research study that brings to the fore the importance of these shrines and their compelling historical and socio-cultural background. The book reveals many intriguing legends and stories associated each of these Gurdwaras which stand as reminders of the struggles and hardships faced by the Gurus in upholding their faith, and helps in keeping the spirit of Sikhism alive in the minds and psyche of the Sikh population”.

The book will be available on leading online portals soon.