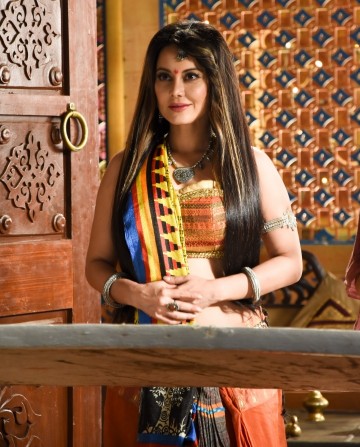 The ongoing track of Tenali Rama has become more interesting due to the mysterious entry of Chandrakala (Vishkanya). Vishkanya is trying various tactics to kill King Krishnadevraya but all her efforts are going in vain.

In the upcoming track we will see that Rama (Krishna Bharadwaj) drops an amethyst stone in the Darbaar which was given to him by Amma. She forces Rama to go to the Darbaar and get the stone at night. Rama gets scared and asks everyone to accompany him. While searching for the stone, they see Vishkanya (Minissha Lamba) who comes to drink the left overkheer which was brought for the snakes. The family is shocked to know her dreaded truth.

In the meantime, Gundappa by mistake, makes a sound with his bells due to which Vishkanya gets to know about Rama and his families’ presence and she reveals her true identity to them. She exhales her poisonous breath onto Rama’s face making him dizzy owing to which he faints. She warns Rama and his family that if they try to prevent her or inform the King about her, she will kill everyone including Rama’s family.

Will Vishkanya be successful in her evil plans? Will Rama save his family from the poisonous Vishkanya?

Commenting on the track, Minissha Lamba (Vishkanya) said, “Now Vishkanya is in the final stage of reaching her target to kill Krishnadevraya. But it will be exciting to see whether Rama will come in her way and save the King and defeat her?”

To catch this interesting track, tune into Tenali Rama from Monday to Friday at 8 pm, only on Sony SAB!