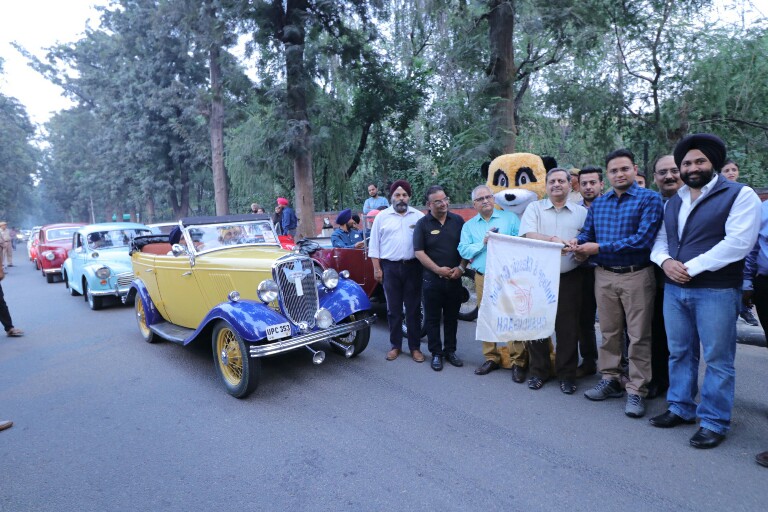 As as a part of the Chandigarh Establishment Day celebrations which will be held from November 1 to 5, a vintage car rally was organised from Leisure Valley here.

With the Chandigarh Administration as an associate partner with Showbizz Celebrations Pvt. Ltd., this rally comprising of colourful cars went around on city roads and brought back the true spirit of city, which is that of elegance and grace.

The vintage car rally was flagged off from Leisure Valley by Jatinder Yadav, MC Commissioner here today. Added attraction was a vintage tractor by Swaraj Tractors, which was something unique in the rally. The Indian Oil Corporation, also one of the sponsors, gave away a gift voucher for fuel worth Rs. 5000 to one lucky winner. Red FM 93.5 hosted the event.

The main event will be hosted in the Parade Ground, Sector 17 and marked by stellar feats by renowned artists.

Giving the information, Brig. J.S. Phoolka, Founder President, Vintage and Classic Car Club Chandigarh, and B.S. Manco, Founder Secretary General, said, “It is a moment of pride to be associated with Chandigarh Establishment Day, which is celebrating not just the city but also what makes it a class apart, besides of course acknowledging the contribution of its eminent citizens who have made it one of the most beautiful and planned cities of the country.”

Neha Duggal, also a Director of Showbizz Celebrations Pvt Ltd., said, “Chandigarh Establishment day will be acknowledged this year by 5 days long festive celebrations to commemorate 51 glorious years of Chandigarh’s foundation as an independent UT and the capital of both Punjab and Haryana on November 1, 1966.”

The smart city Chandigarh’s grand event will be powered by CU App, which will showcase a mesmerising journey of Chandigarh. The opening of the celebrations will be the Icon Awards night followed by star performances every evening. Artists like Gurdas Maan, Nooran Sisters and Gippy Grewal will enthral the audience. A fashion lifestyle expo, a unique 1st in its kind Junior World, A 5-day long food festival in the town will be added attractions.

FCA India Opens Online and Nationwide Pre-booking for the Made in...