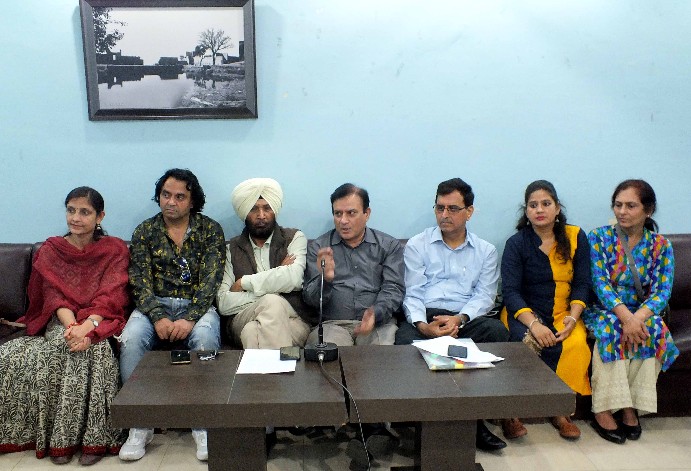 Sargam Society of Indian Music and Art (Regd.), Mohali, is organizing a musical and dance evening “Vaadan-Nritya-Gaayan” at Tagore theatre on 13 April on the occasion of Baisakhi in collaboration with another registered society Nrityabhinaya, Gurugram. The evening will be a bonanza of instrumental music, contemporary and Odishi dance and a blend of Punjabi Sufi, folk and film songs with signature item of Bhangra.

A Press Conference was organized to announce the programme  at  Press Club, Chandigarh  on Thursday. The press briefing was initiated by S. S. Bhullar, President Sargam Society and susequently, RD Kailey, General Secretary Sargam Society. Local Artists who are performing on the evening including Param Chandel, Asha Bajaj, Sushil Nagpal, Karamjit Kaur and Neeru Porwal were also present on the occasion.

While briefing media, RD Kailey said that the programme will comprise of three segments each of about forty minutes. The first segment will be a musical ensemble of tabla, flute and taar shehnai by eminent maestros Debasish Adhikary and Chetan Joshi from Delhi and Isher Singh from Punjab. The second part will be the Odishi and contemporary dance by a group of about 16 dancers led by an accomplished Odishi Densuese Kabita Mohanty. The third segment will be exhibited by the local male and female singers. It will be given a dance accompaniment by four boys and girls Snobar Rupal, Dikshit Lamba, Udaivir Kohli and Priyanka Jindal. This will be followed by Punjab’s evergreen item Bhangra.

Gond Paintings: the warp-n-woof of the Gonds