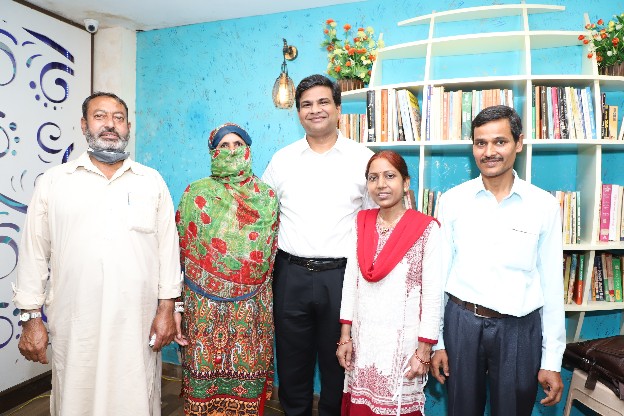 In a rare gesture of humanity, a unique kidney swap was successfully conducted between a Hindu family from Bihar and a Muslim family from Kashmir at Fortis Hospital Mohali recently. The surgery was performed by a team of doctors led by Dr Priyadarshi Ranjan, Consultant, Urology, Andrology & Transplant Surgery, Fortis Hospital, Mohali.

The families of Manjula Devi from Bihar and Abdul Aziz from Kashmir were looking for suitable donors since the spouses’ kidneys were a poor mismatch for each other. The families crossed paths within three months after they got themselves registered in a mobile app iKidney which is developed by Dr Ranjan. After conducting all the requisite tests and examination, experts opined that the kidney of donor Mr Sujeet Kumar (46) – husband of Ms Devi(42) – was a good match for Mr Aziz. Similarly, the kidney of donor Ms Shazia(50) – wife of Mr Aziz (53) – was a good match for Ms Devi. Both families agreed to undergo surgeries for a paired kidney exchange.

Speaking after the successful swap surgeries, Dr Priyadarshi Ranjan said, “It gives us immense satisfaction that the swap Kidney transplant was a success. Both the families are extremely happy as the patients are recovering and responding well to the post-surgery treatment. This fortunate matching was possible through iKidney app that explores for possible paired kidney exchange between eligible donors and patients.”

Ms Manjula Devi, who received Ms Shazia’s kidney, said, “I feel very lucky that we got in touch with Shazia’s family. It gives me a great source of strength that humanity, above all religion, is the greatest religion of all.”

Mr Abdul Aziz, who received a kidney from Mr Sujeet Kumar, said, “We now know that helping a human in the times of need is the greatest deed for anyone. Humanity as a religion makes us humane. What we experienced through this swap is nothing extraordinary but exemplary display of humanity, love and care. We thank Dr Ranjan for everything he did in this regard.”

Dr Ranjan has been a huge proponent of the swap Kidney transplant or Paired Kidney Exchange in the country and has been actively working in the field since several years. This amazing coincidence was made possible by the iKidney app, which has been developed by Dr Ranjan, who is also the Programme Director for Swap Kidney Transplantation and currently runs the busiest kidney Swap programme of the region.