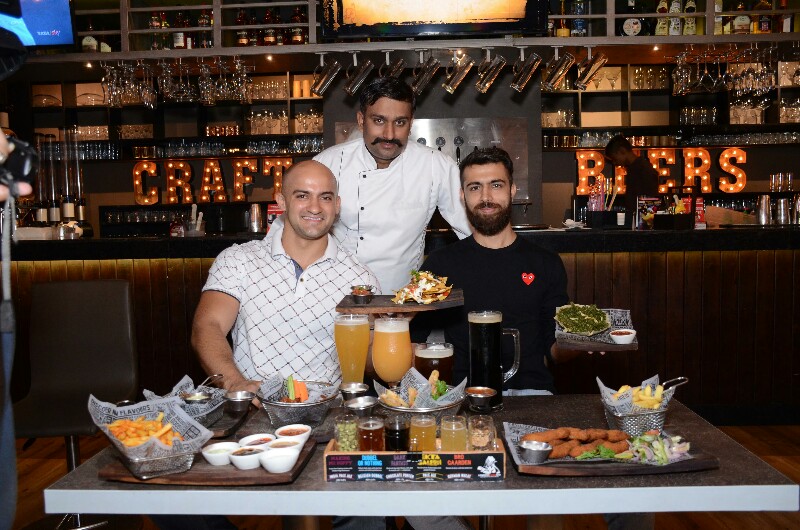 Underdoggs – the well known Sports Bar & Grill which has outlets in different parts of the country, has opened its first location in Punjab – in an all new format — as Underdoggs Brewery & Kitchen in Ludhiana’s Flamez Mall.

” We have  unveiled an all new Underdoggs based on the Brewery & Kitchen format. I’d like to call it Underdoggs 2.0, we’ve taken a new design approach in all aspects with our new format, transforming our interior design, new service ware, expanding our food & beverage menu and included the addition of a craft brewery. The original DNA of Underdoggs is still in-tact, but with a new appeal we feel people will love.” Said Rish Saini – Co-CEO

It is noteworthy that Underdoggs is the winner of multiple accolades, recently winning the title for best sports bar in the country at INCA- India’s Nightlife Convention & Awards- Hosted by National Restaurant Association of India. Also claiming the award for best bar in Guwahati at the 2017 Guwahati Food Awards.

The USP of the outlet is its craft beer which is made with passion in small batches, is flavourful, fresh from the brewery & without any added chemicals. Most importantly it’s great in taste. “We will be starting off with 5 beers on tap, later moving to Six. Two of which will change monthly offering a new experience for guests. We want enthusiasts to Stop drinking tasteless ‘beer water’ & start drinking delicious flavorful craft beers.” Adds Rish. The unusual craft beers introduced during the event were Masala Saison, India Pale Ale, Chocolate Porter, Belgian Dubbel & German Hefeweizen.

More than 12 handcrafted Signature Cocktails available exclusively at Underdoggs Ludhiana too were showcased.  Cocktails like Whiskey Masala,Gayle’s Rum Rummer, Toasted Coconut Colada among others are a major attraction here.

The outlet also offers a unique food selection to go with the drinks. Gourmet food from the kitchen has a choice of dishes handpicked from the best that American Pub, TEX MEX , Indo-European and Continental cuisine offers.

“The addition of ‘Kitchen’ in the name was deliberate in light of our focus on an extensive menu offering. We’ve retained some of our fan favourites from our previous menu like our famous chicken wings with 12 signature sauces & hand tossed thin crust pizzas. But there is lots new in store.” Said Rish.

While you enjoy your favourite brew that pairs well with the food, 20 + HD Screens & Projectors placed at clever angles allow you absolute viewing comfort. One can also try a hand at a game of pool, darts, foosball, carom, giant jenga, beer pong or any of the multiple board games you can play right at your table. So there’s plenty of action on screen and off it to keep you busy.

“The city of Ludhiana can enjoy stellar performances for world class acts and local talent. An active event calendar has been put in place for the enjoyment of our guests. Look to see new performances on a weekly basis.” Sums up Rish.