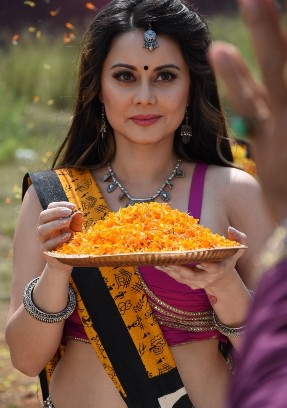 The gorgeous and versatile actor Minissha Lamba will be seen playing the role of Chandrakala (Vishkanya) in Sony SAB’s show Tenali Rama. The character of Vishkanya is that of a vicious and poisonous maiden. She is a beautiful assassin who reaches her target effortlessly without anyone realizing her presence. With a high level of poison in her blood, any human bitten or scratched by her can lose their life. Here’s getting to know the gorgeous actress better.

1) How does it feel to be a part of Sony SAB’s popular show Tenali Rama?

It feels great to be a part of this show. My friends who are an avid fans of the show gave me a lot of feedback as they watched it saying it’s a really fun show. After shooting for a couple of episodes, my friends actually asked me about how the actors are behind the scenes. I am really happy that this show is one that I make a debut on television with.

Vishkanya is a poison maiden. In ancient times, a character like her was a part of folklore, a mythical character. The character is very interesting as she is a beautiful assassin who reaches her target effortlessly without any suspicion. She can kill swiftly with a bite or a scratch due to the high level of poison in her.

Honestly, I just landed on the sets and the director told me what to do. I asked what the traits of a Vishkanya are and figured that she is just like any other lady on the outside, but is actually a hidden assassin who comes with a hidden agenda.

8 .Any special message that you would like to give your fans?

Catch Minissha Lamba as Chandrakala only on Sony SAB’s Tenali Rama from Monday to Friday at 8 pm! There was Sony SAB twice in this line

Karwa Chauth Celebrations on the Sets of Hasseyan Da Halla 2...