A trilingual Poetic Symposium on the occasion of Baisakhi was organized here today by the Punjabi Lekhak Sabha Chandigarh, at the Punjab Kala Bhawan. Miss Satinder Satti, Chairperson of Punjab Arts Council was the Chief Guest.

While speaking on the occasion Miss Satinder Satti said that Baisakhi is a pious social and religious Festival of the region especially of the Punjabis. It is being celebrated as harvesting season of the Rabi crop. The Tenth Master Guru Gobind Singh ji created Khalsa the Pure Man on this day in the year 1699. Baisakhi had its link with the freedom struggle of the country. A British Officer ordered indiscriminate firing on the innocent and peaceful persons at Jallian Wala Bagh in the year 1919.

Miss Satinder Satti exhorted the poets and other litterateurs of all Indian Languages to educate the masses of this country about their constitutional duties, which is the prime need of the day. She said that time had come when every citizen had to endeavor hard in order to ameliorate the lot of poor, have- not and other needy sections of the society.

She urged the poets to wage a relentless crusade against social evils such a drugs etc.

Miss Satinder Satti honoured five Lady Poets who offered themselves for arrest and were arrested by the Chandigarh Police on Mat Bhasha Divas i.e. on February 21, last in order to register their protest against the policy of the UT Administration not using Punjabi Language in the administrative work.

Pakistani Artist Zafar Lohar has presented Punjabi folk songs on this occasion. The audience and viewers enjoyed and applauded the performance. Punjab Sahit Akademi has honoured Sh. Zafar Lohar by presenting a Memento and Cash reward. 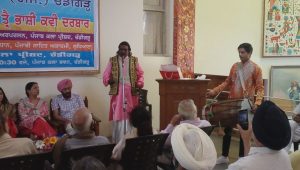