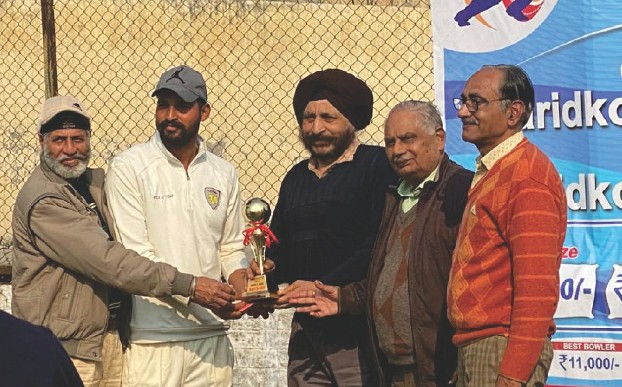 Punjab level Trident Inter District Cricket Cup, 50 over’s each side one day tournament,  started today in various districts of Punjab as part of a campaign started by Padma Shri Rajinder Gupta, Chairman of Trident Group and Chairman of Punjab Cricket Association Mohali to promote the game at the District level throughout Punjab.

The league matches are being played at various district locations of Punjab on 7th, 9th, 11th Feb 2021 followed by Semi Finals on 15th Feb , second runner up on 17th Feb and finals on 18th Feb.  In total 15 district cricket association teams are participating in the tournament which is divided in 4 pool groups

Teams in Pool A,B &C will be playing 3 matches each whereas in the Pool D each team will be playing 2 matches. Top teams from the pools will meet in Semi finals and further winners of these semi finals will play for the top honors. The tournament Trident Inter District Cricket Cup 2021 has been approved by Punjab Cricket Association. Live scores of the matches played are also being made available at https://cricheroes.in/tournament/207793/Trident-Inter-District-Cricket-Cup

Fazilka DCA vs Faridkot DCA played at Barjindra Colllege, Faridkot , Team Fazilka won the toss and opted to bat first . They made 151 all out in 39.3 over’s . Chasing the total Team Faridkot made 155 for loss of 1 wicket in 32.4 overs easily winning the match Ravinder Lefty of Faridkot was declared man of the match for his excellent bowling performance (7.3-2-16-3 ). Naman Dhir ( 64 runs in 65 balls with 8 boundaries)   &  Sahaj Dhawan  ( not out 64 runs of 106 balls with 4 boundaries) of Faridkot  were the star performers in the successful run chase .

Hoshiarpur DCA vs  Moga DCA played at Govt College Hoshiarpur , Team Moga won the toss and decided to field first . Hoshiarpur DCA batting first made 209 all out in 46.1 over’s , in reply Team Moga scored 123 runs  all out in 32.1 over’s and lost the match by 86 runs . Manjinder Singh of Team Hoshiarpur was declared man of the match for his excellent spell of ( 10-1-31-4).

Sangrur DCA vs Bathinda DCA played at Cops Club Bathinda, Team Bathinda won the toss and decided to field first . Batting first Sangrur DCA made 205 all out in 47.2 over’s . Chasing the set target in a nail biting finish  Bathinda DCA scored 207 runs in 48.3 over’s for a loss of 7 wickets and won the match. Uday Saharan anchored the innings with his unbeaten knock of 75 in 111 balls and was declared the Man of the Match.

Mansa DCA vs Barnala DCA played at Khalsa Cricket Ground Mansa, Team Mansa won the toss and elected to bat first and made 179 all out in 41.2 over’s . Chasing the set target team Barnala made 180 runs for loss of 1 wicket only in 28.5 overs and won the match with 9 wickets. Mandeep Inder Bawa of Barnala was declared the man of the Match for his unbeaten innings of 86 runs in 90 balls .

Muktsar DCA vs Ferozepur DCA played at NPS Cricket Ground Muktsar , Team Ferozepur won the toss and opted to field first . Batting first Muktsar made 238 for a loss of 9 wickets in their 50 over’s . In reply Team Ferozepur scored 126 runs all out in 30.1 overs and lost the match by 112 runs . Harjot Dhawan of Muktsar was declared man of the match for his superb all around performance with the bat and ball scoring 50 runs and taking 5 wickets.

Kapurthala DCA vs Fatehgarh Sahib DCA played at Govt College Kapurthala, Team Fatehgarh Sahib team won the toss and decided to field first. Batting first Team Kapurthala made a score of 365 for loss of 7 wickets in the 50 over’s . Chasing the target team Fategarh Sahib was bundled out for a mere total of 47 runs . thus losing by a huge margin of 318 runs. Guneet Paji Acd of team Karurthala was declared man of the match for his superb knock of 106 runs in 64 balls.