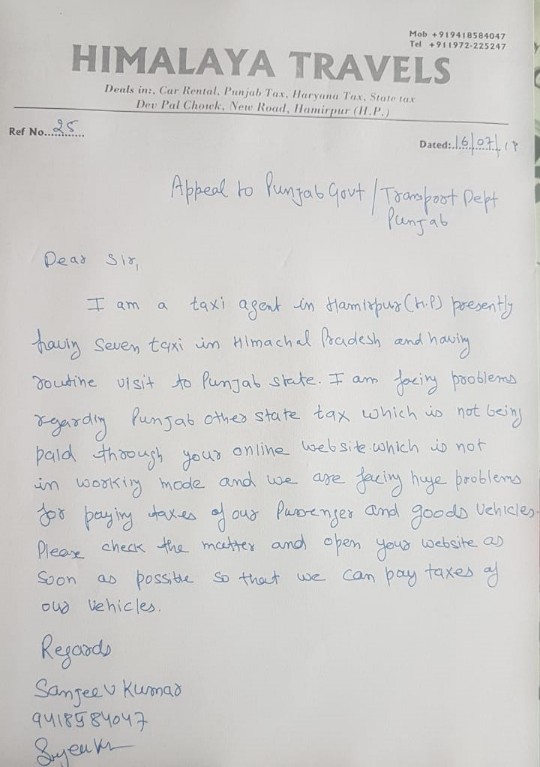 The Punjab Transport Department, recently withdrew the service of e-payment for Inter-State Tax Barrier. Several transporters, who have been earlier using the portal to pay online the Inter-State Tax, have started to appeal to the Chief Minister, Transport Minister and Transport Commissioner of Punjab to reopen e-payment service. Through tweets as well as the letters, several transporters stated that this move of withdrawal of the e-payment service is not only creating inconvenience to the people but also brings in the question the functioning and accountability of the Punjab Transport Department.

In a move that will affect lakhs of people entering the state and pay the tax stress-free, people have been stressing on the fact that now that the process is manual again, there is more scope of local failure, data loss, and inconsistency.

Piyush Singhal from Delhi, who operates multiple commercial vehicles, said, “Paying the interstate tax online was such relief! It seems cruel, that the department has now suddenly decided to pull out the service of online payment. This is creating a huge inconvenience for me as a lot of time is wasted to get the same processed via the old method.” He also mentioned that he has already written an email for the same and reached out to the CM of Punjab for help on Twitter.

Sanjeev Kumar, a taxi operator from Hamirpur district in Himachal, also expressed his disappointment via a letter to the Transport Department, over the departments’ sudden decision.

In an era of payment gateways, digital wallets, and the like, where the business landscape is increasingly dominated by online payments, this move by the department has not only created confusion for the transporters but also bought into question the functioning of the department.

Different sets of E-Vahan Online Services have been implemented by different states/ RTOs at present in sync with the PMs Grand vision for digitizing India. The owners of vehicles could earlier log on to the portal from any internet access point, and deposit their due taxes online.

Apart from bringing in transparency, e-Vahan helps in developing a robust and reliable database on vehicles both private and commercial, with no scope of manipulations. Now, with the service being withdrawn, transporters and drivers entering Punjab will be put to great hardship and will abruptly disrupt business too.

“We the Sikhs” unveiled by Dr. Manmohan Singh at Prakash Utsav...