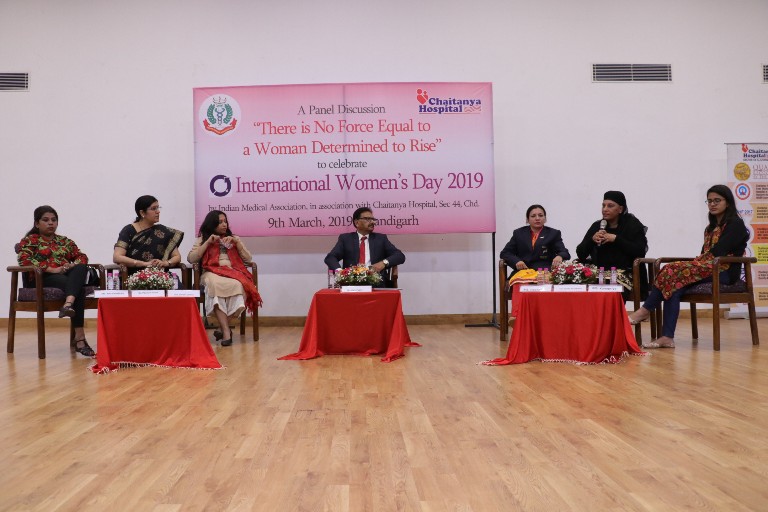 To celebrate the success of some extraordinary women achievers, Indian Medical Association (IMA), Chandigarh in association with Chaitanya Hospital organized a panel discussion at IMA Complex, Sector 35 here today. An impressive panel of young women from diverse fields told about their life stories, their motivations and struggles and how they achieved their goals despite facing so many obstacles.

The panellists spoke on the topic ‘There is no Force Equal to a Women Determined to Rise’, and the discussion was moderated by Vipin Pubby, former Resident Editor, The Indian Express.

Dr B.S Chavan, Director Principal, Government Medical College and Hospital, (GMCH) Chandigarh was the chief guest on the occasion. Senior women doctors of city, who have devoted their whole life in service of their patients, were specially felicitated on the occasion.

Speaking on the occasion, Dr B S Chavan said, “Despite significant change in the attitude of society, still woman has to put in very hard and bold front to live with dignity. Gender discrimination at home and work place is still rampant.”

He said, “Working status has given women more financial power and independence. However working women performs additional role in family and despite they does not receive much appreciation” “Let us all inspire the women around us so that they have equal access to education, health, wealth, entertainment and employment.  Let us also prepare ourselves to be led by women as today’s leadership is largely male dominated” he added.

Dr Neeraj Kumar, President IMA, Chandigarh said, “Medicine as a profession is a trendsetter in gender neutrality and has always encouraged and welcomed women with enthusiasm.” A demonstration on self-defence was also carried out by police personnel.

Vipin Pubby while moderating the session, said “No country can make progress unless half of its population gets actively involved in national building. The contribution of women, which undoubtedly is the stronger sex, to evolvement of society, cannot be overestimated.” He added, “Here are a group of high achievers who are role models for others. Their grit and courage is bound to leave a huge impact and encourage others to turn their dreams into reality.

Dr Poonam Arora, Senior Scientist at CSIR National Physical Laboratory New Delhi touched upon the fact that, “Being a woman and that too with an ambition is a terrible combination in our country. Women are considered as a weak, docile and a homely entity.” She added that woman has immense power and, with an ecosystem of support and opportunities, there is nothing that a woman can’t do and achieve. And there is no challenge that she can’t overcome.”

Alka Chaudhary, Programme Assistant Regional Organ & Tissue Transplant Organisation, PGIMER, said, “There is a need to change the mentality of the society. Discrimination between the boys and girls is still rampant in rural and urban areas as well. Whether its education and health or moral support, society give more preferences to boys, which should be provided equally to both gender. ”

Poonam an International Para Table Tennis player shared her life’s tough experiences. She said, “I was inflicted by polio at the age of 10 and due to disability I have faced a lot of problems but I never gave up. I had never played table tennis until I got married. My husband is my coach after watching him I picked up tennis and with his motivation and belief I became first Para table tennis player and won gold medal in Para Thailand open 2011.”

Rajinder Kaur Dhindsa, who is working through her NGO expeditiously for the welfare of society said, “For any country’s development, development of women is very important, and we can’t leave them behind. Being a woman we have to play different roles. We have immense power and can bring a revolution and can fight with solidarity against social evils.”

Kanupriya. Panjab University Campus student’s Council President, said, “I basically belong to a small town Patti, near Amritsar. Fought against the Brahmanical patriarchy that imposed hostel curfew. I am extremely happy for initiatives like these as we working together in our respective fields and outside while recognizing our responsibilities towards the society is in essence people’s development. Many congratulations for coming together and celebrating International Working Women’s Day and realizing it’s importance.”

IMA has a number of programs like Mission ‘Pink Health’, ‘Aao Gaon Chale’ specially working for young girls and women and events are conducted throughout the year on important health and safety related issues.

Seminar organized by Department of Pediatrics, on “Sensitization Regarding Prevention of...