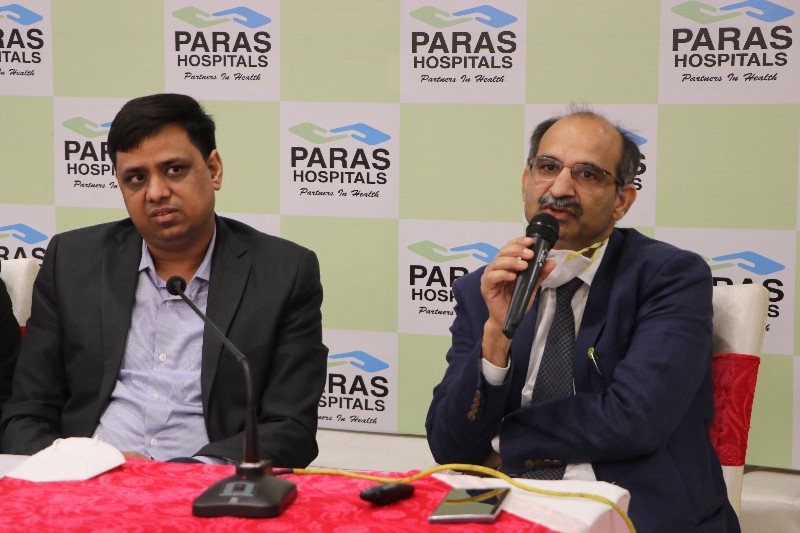 Throughout the world millions of people are affected by COPD Diseases including emphysema, chronic bronchitis, refractory (non-reversible) asthma, and some forms of bronchiectasis.  Chronic Obstructive Pulmonary Disease (COPD) is an umbrella term used to describe progressive lung diseases. This disease is characterized by increasing breathlessness.

Shedding light on the ailment Chronic Obstructive Pulmonary Disease (COPD) and its treatments, Dr. S K Gupta ,  Associate Director Pulmonology, PARAS Hospital Panchkula said, “COPD 2nd Largest killer after Heart Problems & Cancer worldwide and India has become COPD Capital of World. Many people mistake their increased breathlessness and coughing as a normal part of aging. In the early stages of the disease, you may not notice the symptoms. COPD can develop for years without noticeable shortness of breath. You begin to see the symptoms in the more developed stages of the disease. Chronic obstructive pulmonary disease (COPD) is a progressive form of lung disease ranging from mild to severe. It is characterized by a restriction of airflow into and out of the lungs that makes breathing difficult. “

Sharing his experience Dr Sumit Jain Senior Consultant Internal Medicine, PARAS Hospital Panchkula said “COPD most often occurs in people 40 years of age and older who have a history of smoking. These may be individuals who are current or former smokers. Not everybody but most of the individuals who have COPD (about 90% of them) have smoked. COPD can also occur in those who have had long-term contact with harmful lung irritants in the workplace like chemicals, dust, or fumes, organic cooking fuel, may also cause COPD. Even if an individual has never smoked or been exposed to pollutants for an extended period of time, they can still develop COPD.  ‘COPD prevalence is around 5.5 to 7.55% in Indian. ’ Recent studies suggest prevalence rate of COPD in males is as high as 22%  in men and 19% in females.

On this occasion Dr S K Gupta also said “Many sufferers have trouble walking short distances and are especially susceptible to illness and pneumonia. Often, sufferers need oxygen support 24 hours per day. If you show signs of emphysema or chronic bronchitis you may have COPD. The long-term effects of COPD result in an enlargement of the right side of the heart and eventual death.” There is no permanent cure for COPD, but treatment options are available to prevent more damage and improve quality of life.’’

Dr S K Gupta further added, ‘’Also, as the temperature drops, people having COPD are more prone to illness. The symptom becomes more aggravated during colder weather. The effects of cold weather on the lungs can be extreme and chronic exposure to cold environments is known to cause dramatic changes to the respiratory system. If a COPD patient develops COVID , it really life threatening.

The lungs provide oxygen to the bloodstream and the heart pumps blood, delivering oxygen to various parts throughout the body. With an onset of low to extreme temperatures blood vessels begin to narrow, restricting blood flow and depriving the heart of oxygen. The heart is forced to pump harder, which ultimately increases blood pressure. In mild winters particularly, the largest strain on the respiratory system can be found, leading to a higher rate of cold-related mortality among the elderly. That’s why it is important that you talk to your doctor as soon as you notice any of these symptoms. Ask your doctor about taking a spirometry (Pulmonary Function Test) test. ‘’

‘’Early screening can identify COPD before major loss of lung function occurs. Most cases of COPD are caused by inhaling pollutants; that includes smoking (cigarettes, pipes, cigars, etc.), and second-hand smoke. Fumes, chemicals and dust found in many work environments are contributing factors for many individuals who develop COPD. Genetics can also play a role in an individual’s development of COPD—even if the person has never smoked or has ever been exposed to strong lung irritants in the workplace.’’