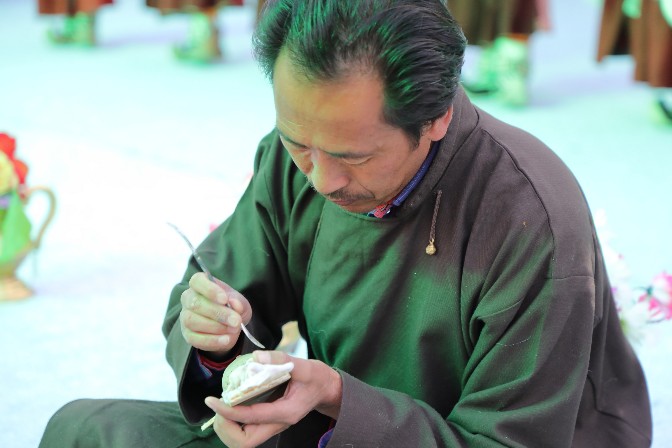 Thousands of art lovers from tricity and other parts of the country thronged Kalagram to be a part of the Aadi Mahotsav (Tribal Festival), a joint venture of Tribal Cooperative Marketing Development Federation of India (TRIFED), Ministry of Tribal Affairs, Government of India and North Zone Cultural Centre, Ministry of Culture (NZCC), Government of India, and enjoyed the united colours of the composite cultural heritage of the country, on the second day today.

The first-of-its-kind cultural bonanza, Aadi Mahotsav, which will continue till February 12, has been meticulously designed by TRIFED, engaged, heart and soul, in ameliorating the lot of tribal artisans from various tribal states of the country, by inviting them to such theme events and sell their handmade products and get the genuine price of their product from the buyers. TRIFED has been doing a great job by helping them promote their art and craft without middlemen, who used to usurp their profits. TRIFED has not only promoted their art and culture but has also educated them and given them special training to go digital and accept payment through credit and debit cards and go with the national aspiration to go cashless.

Aadi Mahotsav, an initiative to procure and secure the tribal life and fascinating folk traditions, turned out to be hub with artists and artisans, the unique festival attracted incurable shoppers in their thousands, and were going on a shopping spree. The incurable shoppers had a wide range of ethnic handloom, handicraft, designers jewellery items, and crockery items and lot more tribal wonders from the states of Jammu and Kashmir, Tamil Naidu, Gujarat Nagaland/Sikkim, North-East states. The stalls selling tribal jewellery, exotic craft items and artifacts witnessed huge rush of inquisitive buyers. Himachalis Kullu and Kinnauri conical caps, shawls, stols, mufflers, lois, jackets for both lady and gents heavily-embroidered half and full socks, were in great demand. On the far end corner was the Kinnauri stall selling a variety of ‘raajmah in palish, crimson-red and black colour selling at 160 per kg and above. A range of organic dry fruits, including badaam, akhrot were hot favorite with the choosy buyers. Another stall, also from Kinnaur, sold organic and medicated soaps to treat dandruff and dry skin.

“The TRIFED deserves a huge round of applause for this initiative to bring India the rural; the tribal and rural India, under one roof. This is the unique feature of our diversity-in-unity, which is amply depicted in such theme festivals. I am returning back to Delhi with a bagful of fascinating memories to share with my family and friends. The food court consisting of 10 lip-smacking tribal food stalls offering savouries from states of the country offering a rich fare of tribal cuisines and culinary delights, where foodies had a date with their delectable delicacies. Lahaul and Spiti popular culinary treat Siddu with tangy peanut chutni, Daal bati churma a hot favorite of Rajasthan and a fare of mouth watering items from the states witnessed huge rush.

The evening segment had a blast of colours from the state of Himachal Pradesh and Leh and Ladakh. The gaily dressed artistes from these states performed to a packed-to-capacity audience, who enjoyed the haunting tunes from the hills of Himachal Pradesh and snowy ranges of the Leh and Ladakh that kept the visiting music aficionados enthralled for hours. The Layul Sur Sangam, presented Garfi, a popular folk dance of Himachal Pradesh. The last presentation of the evening today was Gazal, presented by artistes from Leh-Ladakh, which were greatly appreciated by the audience.

The chief guest of the evening segment was Mr Amit Jha, Health Secretary, Government of Haryana. Mr Jha took a round of the venue and appreciated the impassioned endeavour of the hosts for doing a precious little to promote the tribal art and craft of various regions.

The evening programme was compered by Niharika.