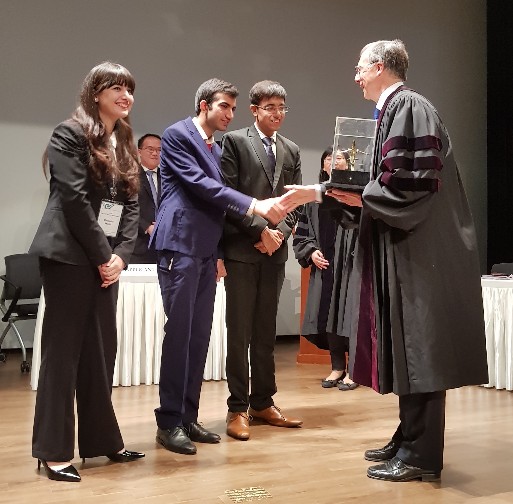 Law students of Patiala bring back the Leiden-Sarin Trophy after a tough international moot court competition in aviation law at Seoul, Korea.

Rajiv Gandhi National University of Law, Patiala, won the international trophy from amongst the 24 teams from 20 different countries of the world which participated in this competition.

Ananya Sharma, a 3rd year student of the Army Institute of Law, Mohali, also brought glory to India by winning the prestigious award of the Best Oralist

The only Moot Court in the field of Aviation Law in the world is the Leiden-Sarin International Air Law Moot Court Competition.

M.L. Sarin, Secretary General of the Sarin Memorial Legal Aid Foundation along with another Trustee Nitin Sarin and Ritesh Agarwal, who attended the competition, informed that 24 teams from 20 countries took part in this international event and the final was between the Singapore National University and the Rajiv Gandhi National University of Law, Patiala.

Chief Justice (retd) S.S. Sodhi, the President of the Foundation, informed that the competition was judged by a panel of judges from 46 different countries, who  were experts in the field of Aviation Law.

M.L. Sarin informed that the judges found the Indian teams outstanding and they outshined the counterparts from other countries, including that from US, China, Netherlands, Canada, New Zealand, Sri Lanka, Serbia, Polant, Sinapore, Greece and France.

The proposition for the moot was an interesting aviation issues involving a collision between a manned civilian aircraft of one country and a remotely controlled drone from another country, which raised many questions involving the security and safety of the civilians, regulation of unmanned aircraft and issues of international law.

The semi-finals and the finals of this international moot court competition are organised jointly every year since 2010 by by the Sarin Memorial Legal Aid Foundation of Chandigarh and Leiden University of The Netherlands, and this year the three-day event was hosted by the Incheon International Airport Corporation at the Korean Aviation Academy on 12-15 April 2018.

The three teams that were selected earlier this year in February after a one-day India Rounds included National Law University, Jodhpur; Rajiv Gandhi National University of Law, Patiala; and the Army Institute of Law, Mohali.

The next Moot Court, to commemorate the 10th Anniversary of the event, will be held in March 2019 at the Army Institute of Law, Mohali, the invitation for which was extended by the Sarin Foundation through its President, Chief Justice S.S. Sodhi.