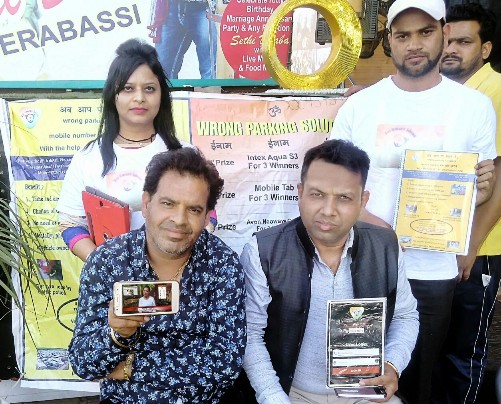 Share on Facebook
Tweet on Twitter
Chandigarh
5 March 2018
Jai Smart Idea Lucky Draw winner will have the opportunity to spend an evening with Tarak Mehta’s Ulta Chashma serial’s Babita ji. Jai Smart Idea is an app which solves the problem of wrong parking. If someone has parked incorrectly, through this app, you can talk with the owner of that vehicle without sharing your contact number.
Smart Idea App has organized a lucky draw in which 5 winners will get a chance to go on Tea Party in Mumbai with Tarak Mehta’s Babita ji. App owners will bear full expense of the trip. This lucky draw has been organized with the aim of making people aware. To participate in this draw, download Jai Smart App and any participant from all over India can take part in it.
The winner can even pass this chance of Tea Party to any of his closest friends or family member. Apart from this bumper prize, many other awards will also be given, more details of which can be obtained from Jai Smart Idea’s Facebook page.
Arun Kumar Goyal, Founder of Jai Smart Idea Chandigarh said that this lucky draw will continue till the end of March. With this, we have also made a short film to make people aware of the problem of wrong parking. This film has been produced in association with Sethi Dhaba’s owner Sonu Sethi.
He further told that that this app is multi-tasking which also updates the records of patient.