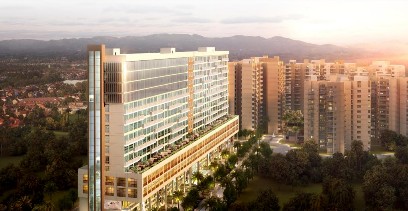 SUSHMA Group, a dynamic and rapidly growing Real Estate development company is known for its meticulously planned approach supported by stringent quality practices benchmarked to International standards. SUSHMA group is also known for its long associations with its patrons, customers or employees.

Taking this legacy forward and bringing the best to the customers SUSHMA brings another Laurel to your city by installing the region’s Fastest Elevator in its Commercial development SUSHMA Infinium on Delhi Chandigarh National Highway. SUSHMA Infinium being the tallest building of the region installed with Fastest Elevator will be significantly advantageous. Manufactured under the strict specifications standards of KONE corporation, the world leaders in high technology elevators, the SUSHMA Infinium elevator moves at the speed of 2.50 mt per sec. which is almost the double the speed of general elevators, the increased speed ensures improved traffic handling capacity, shorter waiting times and higher elevator availability ensuring a smoother people flow in the building.

“Commercial spaces today have been redefined from a basic working space that takes care of just functional needs to one that caters to higher order efficiency and comfort of individuals. Hence it is a constant endeavor of SUSHMA to bring them nothing but the best. It gives me immense pleasure when we bring the world class facility for the ambitious entrepreneurs of the city.” said Prateek Mittal, Executive Director, Sushma Group

With many upcoming Commercial Projects, there is an improved standard of designing and planning, the elevators are becoming integral part of the design owing to its importance and functionality. India is currently the fastest growing elevator market in the world. Growing at 11.2 per cent each year (CAGR), its total market size stood at approximately 58,000 units in FY 2013-14 and is projected to grow to more than 100,000 by 2018. From a market value of 1.36 billion euros in 2013, it is expected to reach 2.57 billion euros in 2019. This momentum is largely fuelled by rapid urbanisation and the resulting new constructions.

VODAFONE REITERATES ITS COMMITMENT FOR COMFORT OF ALL THE WOMEN EMPLOYEES...