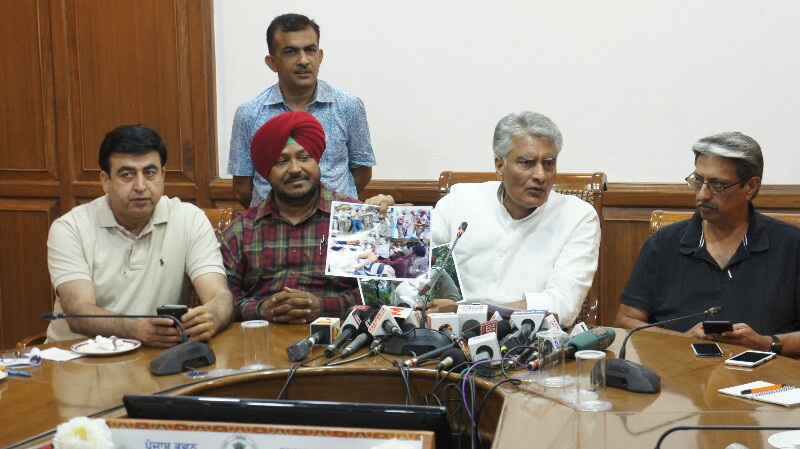 Punjab Congress president Sunil Jakhar  on Saturday accused the Shiromani Akali Dal (SAD) and the Aam Aadmi Party (AAP) of playing a fixed match before the polls and now again in the state assembly, which they had reduced to a battleground due to their inter and intra party power struggles.

Addressing a press conference here, Jakhar lashed out at the opposition parties for making a mockery of the democratic institution of the state assembly and demanded an unconditional apology from both for undermining the sanctity of the House and the Speaker.

Jakhar put before Sukhbir three questions, the answers to which could expose the nexus between SAD and AAP, and also show the complete bankruptcy of leadership in SAD. First, will Sukhbir withdraw defamation case against AAP leader Arvind Kejriwal, who had accused Bikram Majithia of drug smuggling, as their nexus had been now exposed. Second, will Sukhbir apologise for using derogatory words against the Speaker; and finally, will Parkash Singh Badal come to the Vidhan Sabha to take charge of the Opposition.

Asked why the Congress government had failed to arrest Majithia despite its promise of a crackdown on drug trade, Jakhar said it could not go merely by perception and hold a kangaroo court but had to follow the due process of law.

Taking a dig at the Akalis, who had looted the state and its people for 10 years, the Punjab Pradesh Congress Committee (PPCC) president warned that those who came in black robes to the Vidhan Sabha and were  boldly demanding probes, would not have to wait for a long while, as the Captain Amarinder Singh government was going systematically about initiating inquiries and action against the various mafias that had mushroomed during the Akali regime. “Just have patience, you would be dealt for your misdeeds”, he said adding that the Congress government will not be vindictive but no mafia would be spared.

He said historic decisions like abolition of the truck unions and the transparency introduced into the mining auctions clearly showed Capt. Amarinder’s  commitment to fulfilling every promise on this count.

On the developments in the Assembly, Jakhar said that while Parkash Singh Badal had not been coming to the House because the Akali Dal had been relegated to the side, AAP was also suffering because of its internal power tussle, with HS Phoolka playing to the galleries in a bid to establish his leadership.

Jakhar said he would urge the Speaker and the Chief Minister to create an “honorary Opposition leader’s position” in the Vidhan Sabha to accommodate Badal Senior, as the former chief minister was finding it difficult to attend the proceedings due to an identity crises and failure to see the hash realities of being relegated to the third place in the house. He also requested the Speaker to be lenient towards AAP members as they were first-timers in the Vidhan Sabha, and also to train them into the ways of the House.

Describing the language used by Sukhbir against the Speaker as ‘most unfortunate’, the PPCC president said the former deputy chief minister had exploited the inexperience of AAP members to his advantage. Sukhbir was now crying hoarse over something that was of his own making, said Jakhar, adding that it was a case of ‘chor machaye shor’. The watch and ward personnel injured in the melee instigated by the opposition was a national basketball player, he told media persons.

Jakhar also flayed Bikram Majithia for trying to communalise the ‘pagdi’ issue, and urged the Akalis not to indulge in such anti-people acts. However, he said he saw the power struggle in SAD intensifying in the coming days as a result of SGPC chief Kirpal Singh Badungar trying to establish a foothold in the political arena.

The Badal father-son duo had failed to give SAD the much-needed leadership, as was evident from the developments of the last few days. As Sukhbir failed to rein in the party members, they took Badal senior to the hospital out of sheer desperation, even though he had never bothered to visit any Dalit or farm suicide victim, said Jakhar.

While the entire incident in the House was unfortunate, the fact was that the during the Akali regime, Congress MLAs were  stopped by the speaker from entering the Vidhan Sabha premises. “Nobody wanted forcible eviction and, in fact, the Speaker showed remarkable restraint, even naming Sukhbir in an effort to bring the House to order”, said Jakhar, adding that the extreme step was taken only after all his pleas fell on deaf ears. Jakhar also urged the Speaker make the CCTV footage of the incident public to clarify the actual sequence of events, if rules so permit.

Lashing out at the Akalis and AAP for forcing the Speaker to resort to the extreme step of forcible eviction, causing injuries to some members, the PPCC president said the Speaker had in fact been too lenient with the Opposition all through. In fact, some Congress leaders had pointed this out to the Speaker after the obituary references, said Jakhar, asserting that nobody could accuse him of being partisan or biased. Jakhar further said Sukhbir crossed the floor thrice during the Assembly session and could be debarred on technical grounds, but neither the Speaker nor the ruling party made an issue of it.

While appealing to the opposition to behave as a responsible leadership and not let such incidents mar the Assembly proceedings in the future, the PPCC president said the entire drama had been enacted during the budget session to prevent the government from making important announcements. However, he said, both the government and the Congress party had sent out a strong message that all the poll promises would be redeemed.

The Chief Minister could have waited for another four years to announce loan waiver but he did in 100 days, Jakhar pointed out, adding that a large number of beneficiaries would be positively impacted by the move. He was optimistic that even the central government would come up something before the 2019 Lok Sabha elections as loan waiver was being treated by them as a  political issue.

Responding to questions, the PPCC chief said the accomplishments of the government in just 100 days were too many to recount in such a short time. He however, said the manner in which Capt Amarinder Singh had fulfilled the loan waiver promise, despite the state finances being in dumps, was commendable and should be appreciated even by