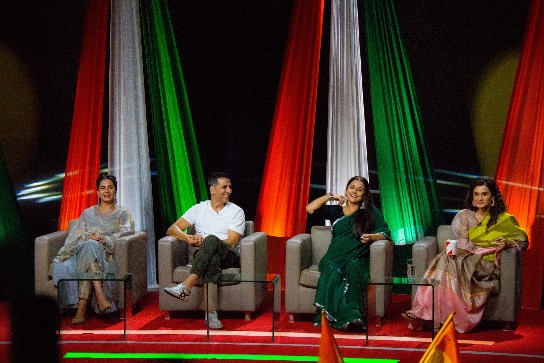 JD Institute of Fashion Technology kick-started the celebration of Independence Week with the star cast of Mission Mangal. An interactive session with the starcast Akshay Kumar, Vidya Balan, Taapsee Pannu and Kirti Kumar was organized on various relevant subjects. The students also interacted on history of Independence Day, Article 370,about the mission, etc. The starcast were excited to talk about their childhood experience and ways in which they celebrated Independence Day.

The session witnessed the conversation on how India created history with the launch of Mangalyaan and the movie is inspired by the true story that led to ISRO’s Mars Orbiter Mission. The starcast also educated the students that the mission was a tale of ordinary people doing extraordinary things. Akshay Kumar highlighted that this movie will inspire the next generation to dream big and achieve the impossible. The session also opened up to the various national issues such as the abrogation of Article 370 bill. The lead actor Akshay Kumar did express his views on how his family is truly happy with the same and it takes a lot of courage to come up with such judgments. He has also stated that his grandparents are from Kashmir and they then shifted to Delhi, and eventually to Mumbai, as his father got posted.

The session also explored a moment where Akshay Kumar articulated his childhood memory of Independence Day. He and his family use to celebrate the day with Indian snack samosa and jalebi.