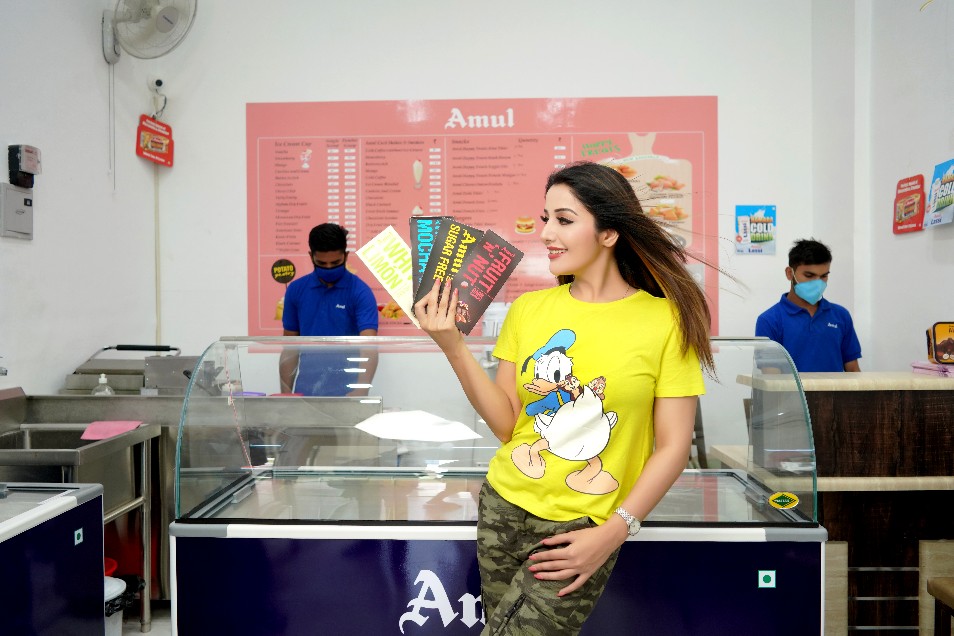 In this Unlock mode, it seems like business is coming back to usual. Shops and stores have opened up and the Government has announced a series of standard operating procedures for shooting of film and TV serials. Recently, Actor-Model Sonia Mann shot for Amul parlours at Ludhiana.

Sonia Mann who has been a part of many brands earlier also became the first celebrity volunteer amid COVID-19 lockdown. On work front, she has featured in 5 punjabi movies like Haani opposite Harbhajan Mann, Hrudyanter opposite Hrithik Roshan , Happy Hardy Heer opposite Himesh Reshammiya. She has also worked in songs with singers like Sidhu Moosewala, Mehtab Virk, Jordan Sandhu and many more.

Talking about this endorsement with Amul parlours, she said, “This is the first time I have shot for a dairy brand. I had a great time shooting for it. Till then, just be safe and keep supporting us. I just hope I will be able to entertain you guys as always.”
As far as Amul is concerned, it has now opened scooping parlours at three different locations in Ludhiana at Model Town (opp RG Stone), Dandi Swami (opp old DMC) and Omaxe Residency and many more to come which has a variety of products and snacks.

OIL COMPANIES TO COME UP WITH MORE RETAIL OUTLETS IN THE...