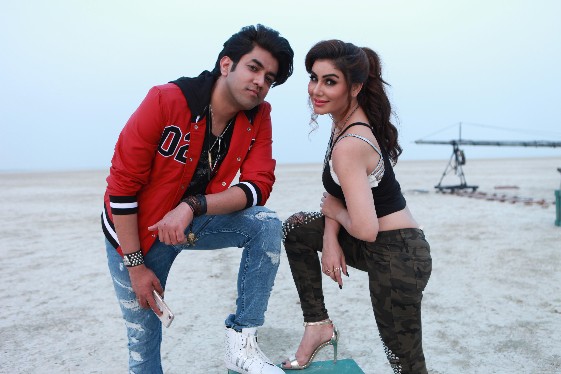 Punjabi Music Industry and people associated with it are leaving no stone unturned to make it big. Over the years, the level of growth Punjabi Music Industry has reached, it’s commendable. In this growth, White Hill Music played a pivotal role by promoting new stars and new genres of music. The next name who is associating with this label is Shaun Tah, he has already released song ‘Gutt’ and now he is coming up with his second song ‘Impress’.
The lyrics of Impress have been penned down by Gursewak Dhillon, who has also composed the song. The impressive music is given by the NRI music director Deep Jandu, who has songs like Manja, Come Here and the recent Good Life to his credits. The power-packed video featuring Kangna Sharma is directed by Gifty and is a presentation of Katia Builder. The video is produced by White Hill Music’s Gunbir Singh Sidhu and Manmord Sidhu.
Talking about Impress, the singer Shaun Tah said, “Gutt and my cover songs were received quite well amongst my admirers. This has given me the confidence as well as a responsibility to do better, sing better and produce quality music. I am a fan of romantic music but this song is entirely different from my comfort zone. That’s why Impress is always going to be special because this is the song where I have tried to go beyond my limits and prove my versatility as an artist. Add to that the names like White Hill Music, Deep Jandu, Gursewak (Dhillon) and Gifty, and I am sure the song ‘Impress’ will impress all the listeners.”
Gunbir Singh Sidhu and Manmord Sidhu, the head-honchos of White Hill Music said, “The banner has given out multiple genres of music this year, and we bring out yet another song to Impress our listeners. It’s our aim to provide platform to the up and coming talents and Shaun Tah is definitely one versatile singer. As per our promise in the very beginning of this year, White Hill Music is giving out yet another song that will be loved by the listeners.”
Impress, sung by Shaun Tah and featuring Kangna Sharma, released on 29th March under the White Hill Music banner.