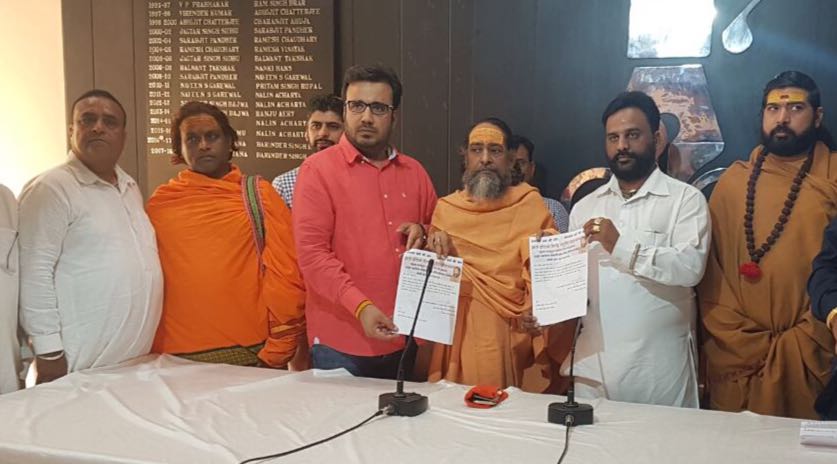 Stalling Amarnath Yatra in lieu of the death anniversary of Burhaan Vaani by the State Govt. offending, Modi should recall support to Mehbooba Mufti- Jagatguru Panchanand Giri. While addressing a press conference at Chandigarh Press Club today Dharmadhish Shri Hindu Takhat and Shri Kaali Mata Mandir Patiala and Kamakhya Devi Mandir Guwahati Peethadhishwar and Mahamandaleshwar Panchdashaanam Bhairav Akhada Jagatguru Panchganand Giri said that if portraits demanding Khalistan-2020 should be removed in 72 hours time lest Shri Hindu Takhat shall hold demonstrations across Punjab. Jagatguru further said that the alleged posters were pasted by the Sikh for Justice Association in order to harm the brotherhood among the communities and incite the feelings of hatred and communalism and in this case proper action would be to arrest the members of the association at the earliest possible. Jagatguru through this press conference has made it ample clear that any such acts of intolerance and communalism shall never be borne by the Takhat and every effort shall be made so that unity and integrity of the country is maintained. He further applauded the efforts of Hon’ble Chief Minister of Punjab Capt. Amrinder Singh for his unprecedented take on curbing the menace instigated by the Khalistanis in a bid to usher the State into unparalleled excellence in every sphere.

Jagatguru Panchanand Giri declared the expansion of the All India Student Federation wherein Sh. Parminder Kumar Bhatti and Sh. Sandeep Pathak were appointed the President North India and State President Punjab respectively. The main objective of the Federation as quoted by Sh. Parminder Kumar Bhatti would be to aware the masses of its working and spreading the message of Hinduism.

Jagatguru Panchanand Giri called the act of the J&K Govt. of stalling the Amarnath Yatra on the occasion of death anniversary of Lashkar Terrorist Burhan Waani as highly offending. He demanded that the Modi govt. should immediately recall its support to Mehbooba Mufti on having hurt the religious sentiments of people. Many members from Punjab of the society was also present during the press conference.