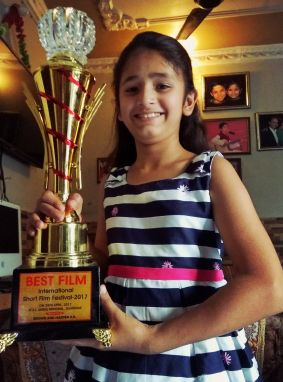 The short film titled ‘ MAAR DEO’ showcasing the menace of female foeticide was declared  ‘Best Film’ and in International Short Film Festival and Iron Man Awards-2017 here today. In a glittering ceremony, the film was also honoured with a prize of Rs. 50000. The film depicts a poignant picture of the deteriorating sex ratio in Punjab and the attitude of society towards girl child.

The Producer and Director of the film, Sanjiv Uppal disclosed that it is based on a true story and brings to the fore true picture of contemporary societal conditions. He also said that while highlighting the crime of female foeticide, the film exhorts the people to change their mindset with the ever changing times and rise against this evil so as to completely eradicate such blots on the name of humanity. He also said that in any profession in modern era the females are carving out a niche for themselves far ahead of their male counterparts.

Divulging more, Mr. Uppal said that he has launched his daughter Komal through the film which was his dream. He further elaborated that on examining the character played by his daughter and its dilemma, the thought pervades through his mind that almighty has planted the idea of this film in his mind by bestowing on him a marvelous gift in the form of a daughter. He further detailed that the shocking figures of sex ratio pertaining to Punjab make one think the same state which feeds the bellies of entire nation, doesn’t thinks twice before killing female child even before she sees the world. He said that this reality cannot be ignored.

The filmmaker also said that various famous artists from Punjabi film industry have played their parts exceptionally well in the film namely Rajesh Sharma, Gurpreet Kaur Bhangoo, Malkeet Raouni, Teji Gill, Ramneet Sandhu, Sukhwinder Kaur, Baljeet Balli, Devinder Virk and Sanjeev Attri. The story has been written by Surmeet Mavi and camera lighting has been wonderfully done by Sanjiv Chauhan. He also thanked K.L. Sehgal memorial and Brown & Hopper (U.K.) company which gave the Best Film award to this film besides the all unit members without whose untiring efforts this film couldn’t have seen the light of the day.