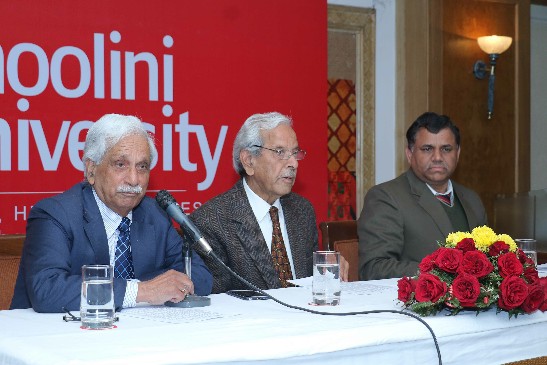 One of the leading centres of research in the country, Shoolini University of Biotechnology and Management Sciences in Solan, Himachal Pradesh, has reached the milestone of filing 101 patents. With this, the university has got the distinction of being one of the top highest generator of patents in the country.

Intellectual Property India, Officer of the Controller General of Patents, Designs, Trademarks and Geographical Indications, Government of India had listed Shoolini University as the 6th top Indian applicant of patents from all Indian universities and institutes in its annual report for 2015-16.

Addressing the media persons here at a press conference, Prof. P.K. Khosla, Vice Chancellor, Shoolini University, said, “It is a matter of pride to announce that Shoolini University has become the highest generator of patents in the region, which has been made possible because of hard work put in by the faculty and students.” Incidentally, the patent cell of the university had also been awarded jointly by  HP-SCSTE (Himachal Pradesh, State Council for Science, Technology and Environment) and DST (Department of Science and Technology, GOI) in 2016 under the leadership of Prof Kamal Dev, the US trained Biotechnologist.  This cell will work in close collaboration with HP patent information Centre (HPPIC) housed in the State Council for Science, Technology, and Environment, HP”, informed Prof. Khosla.

AtulKhosla, informed, “In a short span, Shoolini University has scored 101 Indian patents and 3 PCT (Patent Cooperation Treaty). While, one design patent of Flying Chair has been awarded, 61 patents have been filed by Biological Sciences, whereas 38 are filed by Engineering and one copyright has been filed by Management Sciences.”

He added, “Most importantly; undergraduate students are involved in more than 80 percent of patents. We don’t believe only in patent filing, but marching ahead with commercialization, clinical, animal trials, and developing prototypes. We believe in ‘First Patent, then Publish, and Commercialize’ to infuse growth and societal development.

“India still needs to promote patents to boost the economy of the country. Government should take necessary measures to boost and promote scientists to file more patents and explore the potential of commercialization”, he concluded.

Major areas where Shoolini University has made impact in IPR

Some details about biological sciences patents:

New Compounds which can enhance activity of antibiotics and help overcome bacterial resistance: Antibiotics are gifts of modern science and have very heavy commercial value owing to massive market size of several billion dollars. However, antibiotics suffer from two limitations- high dosage requirement as capsules/tablets to fight infections and development of resistance by bacteria due to which antibiotics become in-effective. The university has developed safe compounds which when added as excipients to existing approved antibiotics, significantly reduce dosage without compromising efficacy and also help to make those antibiotics effective which have become ineffective, by helping to overcome bacterial resistance.

Promising targets for specific diagnosis of malaria: Malaria detection has immense economic importance as it affects millions of people worldwide. The university researchers have identified promising protein targets (novel peptide sequences) which can help to develop quick detection ‘cards’ or diagnostic tools for use at primary healthcare level.

Better and more efficient vaccines for malaria: Malaria detection has immense economic importance as it affects millions of people worldwide. The university researchers have identified novel peptide sequences which can help to develop highly effective vaccines to prevent malaria.

Novel composites for pollution control caused by dyes (e.g. from textile industry): Efficient composites have been developed which can help in easy and quick degradation of polluting dye waste emerging from dye and textile industries.

Novel nano composites for treatment of drinking water: Efficient nano-composites have been developed which can help in easy and quick degradation of polluting dyes.

Production of commercially important enzymes: Enzymes have lot of commercial value. Promising extremophilic microbes have been isolated that produce highly efficient such as B-galactosidase, xylanase, antifreeze proteins.  These enzymes are of great industrial importance.

Novel compounds with potent anti-fungal and antimicrobial activity:New chemical compounds have been identified, which are effective against different bacteria and fungi. Offer advantages of easy and eco-friendly synthesis.

Nanocomposite for controlled release of the antibiotic ofloxacin: The nanocomposite is easy to make and incorporate in tablets and results in prolonged action over a period of 24 hours, instead of only 3-4 hours in conventional tablets. Hence, better for patients.