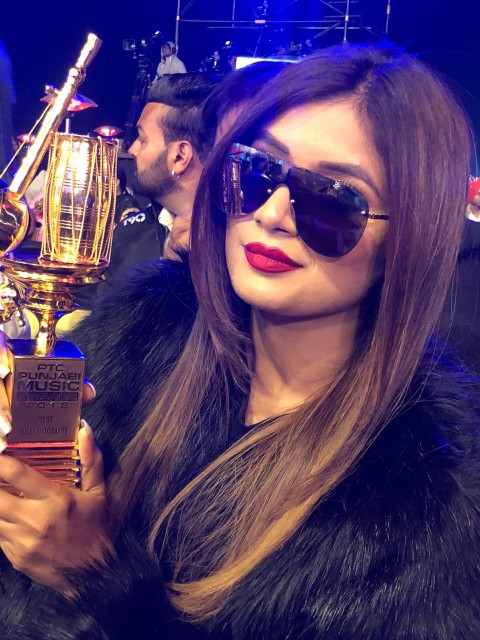 Punjabi music industry is blessed with singers that are admired beyond age groups and linguistic differences. Such talents are given their due recognition by the music fraternity every year during various award shows. One such beautiful singer who was recently awarded for her art is Shipra Goyal. The lady won the Best Duet Vocalist 2018 trophy at PTC Punjabi Music Awards held at Mohali recently.
Shipra Goyal won the award for Naraan that released under the VS Records label. Her duet with Punjabi vocalist Sajjan Adeeb has been streamed more than 17 million times on YouTube. The lyrics of Naraan have been penned down by Aman Bilaspuri while Music Empire has given the catchy and foot-tapping beats to the song. It has won hearts right from its release in June this year.

Talking about her achievement, the pretty singer, Shipra Goyal said, “Naraan will always be special. It was an expression of dreams and aspirations of a normal girl who wants to be loved and respected. Now, it has become even more special. I thank music director Music Empire and Aman Bilaspuri for bringing me on board. I have learnt some of the finest details of singing from them while doing this song. I humbly thank the jury of PTC Punjabi Music Awards who found me worthy of this appreciation. I think this has increased my responsibility. I am motivated to perform better and I promise to keep entertaining my fans that have supported me unconditionally.”

On the work front, Shipra Goyal is collaborating with T-Series for her next titled ‘4 By 4’ which will be released on 20th December. Alfaaz has penned down the lyrics of the song while Ikwinder Singh will give the music.

Other than the beautiful singer, PTC Punjabi Music Awards 2018 was attended by the who’s who of the music industry. The fraternity chose the best of the year to be awarded for their musical prowess. The extravagant night witnessed performances by several big names like Jasmine Sandlas, Bohemia, Jazzy B, etc.