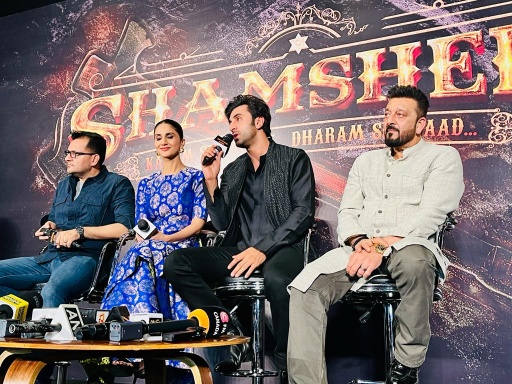 The star cast of Shamshera was spotted in Chandigarh today at Elante Mall PVR , promoting their film.The film will be released in theatres on July 22. The trailer for the film has left fans eager to see it.

Ranbir Kapoor is seen playing a larger than life quintessential Hindi film hero , who is coming to the big screen four years after he delivered the blockbuster Sanju. Sanjay Dutt is seen playing an evil, merciless, cold-hearted brute force of nature, Shuddh Singh. Sanjay Dutt vs Ranbir Kapoor is the clash of the year on the big screen, along with very Magnificent Vaani Kapoor .

Sharing Views , Actor Ranbir Kapoor said , I’m extremely happy to return to Big Screen after good 4 years. My Character in Shamshera is very different, and I hope my fans garner me with same love and support they have shown me in the past.

It has the big promise of a never seen before Ranbir Kapoor, who plays Shamshera in the film! Sanjay Dutt plays Ranbir’s arch-enemy in this huge casting coup and his showdown with Ranbir will be something to watch out for as they will ferociously go after each other with no mercy.

Directed by Karan Malhotra, this action extravaganza has been produced by Aditya Chopra and is set to release in Hindi, Tamil and Telugu on July 22, 2022.