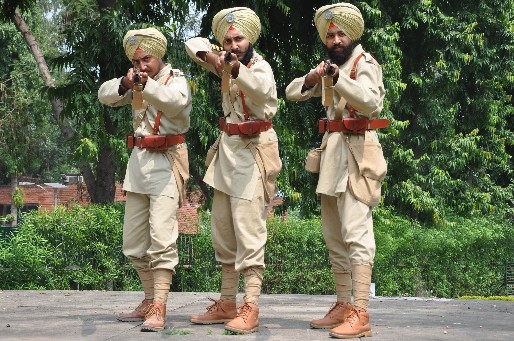 To commemorate the 122nd year of the legendary Battle of Saragarhi, Latta Productions in association with Punjab Art Theatre has produced a unique Sight & Sound historical act ‘Jang-E-Saragarhi.’ Details of the Sight & Sound show were shared with media at a press conference held by the cast & crew of the acclaimed act at Press Club Sector 27, here. The press meet saw participation of Harbux Singh Latta, a Shiromani Nirmata Awardee , who has produced & directed the show, Harshvir Singh Latta, who is the show’s technical director and Bhupal Singh , Assistant Director. Members of the cast were also present in their full battle grandeur replete with their classic Henry Martini guns and a Heliograph.

History is again set to be made when the act will be staged in front of serving & retired officers and soldiers of 4 Sikh, now posted at Bathinda on Saragarhi Day – September 12.  Punjab Chief Minister Capt Amarinder Singh will be the Chief Guest.

Harbux Latta said, “It will be a befitting tribute as 4 Sikh is the erstwhile 36th Sikh regiment, who’s 21 brave-hearts had countered an onslaught of 10,000 Pashtuns and sacrificed their lives safeguarding a signal post – in Tirah region of North-West Frontier Province, now in Pakistan, in the year 1897. The audacious Sikh soldiers had killed as many as 600 attackers.”

It is noteworthy that the act is based on Punjab Chief Minister Capt Amarinder Singh’s much-acclaimed book ‘Saragarhi and the Defense of Samana Forts”. It is also pertinent to state that ‘Jang-E-Saragarhi’, is a unique Sight & Sound Panorama which has been Produced & Directed by Harbux Singh Latta, who pioneered the technique of Sight & Sound shows.

Added Latta,“Experienced theatre artists will depict the valour of soldiers of 36th Sikh Regiment, who under the command of  Havadar Ishar Singh and due to his motivational speech underlining the call of duty  – Naam, Namak & Nishan,  displayed unparalleled battle heroics.”

Harshvir Singh Latta, Technical Director said, “Digital sets of Saragarhi the signal post have been re-created and will be shown on 50 feet LED walls. Finding and booking the massive setup was another hurdle. Such a big and custom setup had not been attempted yet. A 60 ft truss for lighting along with 3000 square feet of stage was arranged from multiple vendors. Costume designing was another feat. After looking around in cloth markets of Chandigarh, Ludhiana, Patiala, we found the khaki cotton fabric for uniforms that resembled 100 years old dresses. And the most difficult part was making of Turban batches of Sikhs as no fabricator would make few pieces required.”

Bhupal Singh, Assistant Director, Jang-E-Saragarhi said, “Army drills were taught which took a lot of time but everyone mastered these. Months of rehearsals together created a family bonding between the cast which shows in performances and adds to the story and characters we are portraying.”

Harshvir Singh Latta, Technical Director added, “After rigorous research efforts of and several script drafts came the time to cast the 21 Sikh actors who would play the 21 braves of Saragarhi. We looked for physical fitness, a discipline in body language and quick learners.”

The property that was the most laborious to recreate were the 21 Henry Martini guns. Carving the butts out of wood based on photographs from the internet were not enough for the property designer to recreate an exact replica. Fortunately, the Qilla Mubarak Museum in Patiala had them on display. The property designer had a first-hand look. However, fabricating barrels and breech loading lever was a difficult task.

Summed up Harbux Singh Latta, “The selfless sacrifice of a soldier for his country does not have any comparison, it deserves the utmost respect. The bravery of these 21 soldiers of the 36th Sikh Regiment showed in the Battle of Saragarhi had to be documented and kept alive for future generations.”