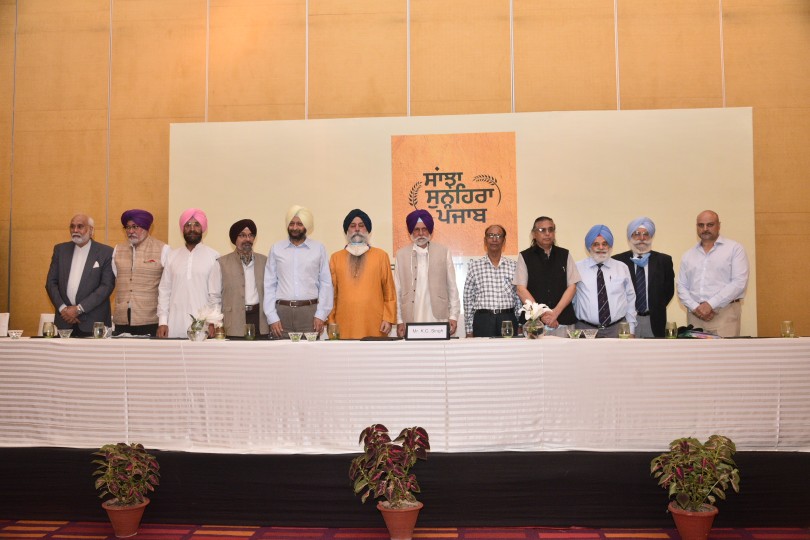 Sanjha-Sunehra Punjab Manch was launched at a well-attended function at Hyatt Regency. Besides the Convenor and Founder Mr. K.C. Singh and Secretary of the Forum Col. L.J.S. Gill, 14 other co-founders were present. They are individuals from diverse fields, in which they have excelled and have extensive experience in social upliftment.

was Envoy to the United Arab Emirates (UAE), and Iran.He then was Additional Secretary (International Organisations) & Coordinator Counter Terrorism inthe Ministry of External Affairs, finally rising to the post of Secretary, Economic Relations.

Convenor, K.C. Singh while speaking at the launch event said, the Manch wants to focus on challenges facing Punjab today and take to the people their views. The aim is to solicit the reaction of Punjab residents, both in urban and rural areas. The Manch, he said, hopes to voice the outcome of this interactive dialogue.

The critical issues facing Punjab include, farmers’ agitation against farm laws; agrarian crisis due to dependence on rice-wheat cycle and its impact on water table, environment etc.; low agricultural growth and deficient investment in industry. He added, then there are issues like poor education facilities, healthcare facilities and housing facilities.

“Equally challenging are issues affecting youth, especially jobs and above all, there is a need for systematic change and ways to check mafias controlling sand extraction, liquor trade and drugs. Systematic reforms are not possible without Punjab deciding what kind of political leadership it elects. Manch’s aim is to spread awareness about these challenges, possible solutions and a roadmap for a golden future.”, he added.

In his address, Mr K C Singh shared the vision of the Sanjha-Sunehra Punjab Manch. He said “This platform will work towards finding solutions to the pressing issues facing the people of Punjab. We will offer our solutions, but more importantly go to the people and seek their advise. We wish to become the voice of all Punjabis “He said, Punjab needs a second Green Revolution , where new markets are created , and farmers ensured dignity and financial prosperity “

Col LJS Gill, who has served in the Indian Army for 24 years and also held senior positions in the corporate world said, “People who say it cannot be done, should not interrupt those who are doing it “

Dr K S Aulakh, Ex Vice Chancellor, PAU, said, “Punjab which used to be the number one State on per capita GDP basis forty years ago has slipped down to the 16th position, 5th most corrupt and most indebted state of India. There is desperation and chaos all around. For this people of unimpeachable integrity, vision, determination and commitment are needed to rehaul and transform it back into a viable State.”

Prof Ronki Ram, who has several years of teaching and research experience at Panjab University and other universities besides being a recipient of several awards, said, “We need to promote skill-based education, supported by a revived government school setup for the generation of respectable employment at the grassroots”.

Maj Gen Satbir Singh (Retd.),who has served as an Instructor at four premier institutions in the Indian Army, said, “Bold measures need to be initiated to reverse the trend to qualitatively improve the Gross Domestic Happiness in tandem with Gross Domestic Product (GDP).”

He added, “The Manch recognises the services and sacrifices made by our armed forces. Ex-Servicemen must be granted the dignity they deserve, and their services incorporated in the larger interest of Punjab.” Presently Chairman of Indian Ex-servicemen Movement (IESM) and Advisor United Front of Ex-Servicemen (UFESM) Jantar Mantar, he has led the One Rank One Pension Movement for Defence Personnel.