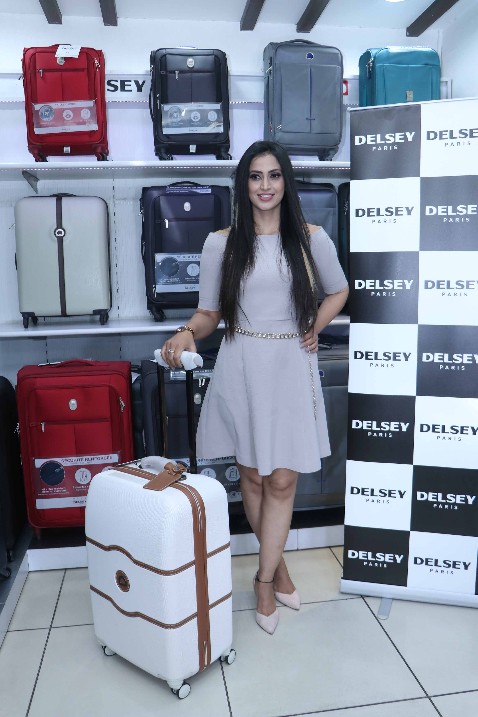 DELSEY LUGGAGE COMPANY of an International Repute Having COMPANY’S SHOW ROOM IN SCO-15 SECTOR-17E, CHANDIGARH had initiated to invite FAMOUS TOLLYWOOD/BOLLYWOOD ACTRESS SAMAIRA SAMDHU,CHANDIGARH DI KUDI on the eve of BAISAKHI FESTIVITY to visit their said show Room ,where while expressing  her liking for DELSEY LUGGAGE interacted with invited Chandigarh Media.

Samaira Sandhu addressed the print and Electronic Media Persons and shared her experiences, story of long journey from Chandigarh to Mumbai. She expressed that despite great struggle, she began successful in being in caste as heroine in the recent Movies i.e. DHAYAM (Tamil) AND DAMAYANTHI (Telegu). Presently she had been associated with number of Hindi Films projects.

Samaira Sandhu further said that she is the daughter of Sandhu Family, was born at Ferozpore, a city on Punjab Border. After completion of her schooling and college tenure she qualified Software Engineering and subsequently did her MBA in Human Resources. She served one of the prominent MNC as Software Engineer, but she was always on the look out to create something extra-ordinary.  As she was very outstanding in Extra-Mural activities like writing, acting, modelling & theatre since her college days, which could help her in achieving her goals of life.

Samaira said that she had authored a Novel “HEAVEN IN A HELL” and her association with famous BOLLYWOOD Singer Jaspinder Narula, brands Like “Geetanjali Jewellers”, NYKAA and “Cleopatra” earned her good respect and mileage and always proved her a worthy face for them.

CURRENTLY SHE IS ALSO WORKING BEHIND THE CAMERA IN THE DIRECTION OF ONE HINDI PROJECT STARRING SHARMAN JOSHI, to LEARN MORE PERFECTION AND TECHNICAL ASPECTS OF A MOVIE.

RECENTLY M/S KALYAN JEWELLERS ENTRUSTED THEIR HOARDING PUBLICITY TO ME IN ANDHRA PARDESH, WHICH HAD LOT OF APPRECIATION.

She believes that such efforts would help her emerge as a perfect actress as she would be more refined in her shots and it would be a boon to her directors in her upcoming projects.This way life is marching ahead with lot of struggle, but after the struggle when success of life salutes it is an enjoyment, which gives utmost satisfaction.

Strengthen the special bond with your sibling this Raksha Bandhan with...