Nothing is better than to experience what you have never done before. The happiness of it is something that one will definitely want to experience in life. Same happened with the Punjabi singer and actor Ammy Virk during the shoot of upcoming Punjabi film ‘Saab Bahadar’ which will be releasing on 26th May 2017.

The film is presented by White Hill Studios and Zee Studios, produced by Gunbir Singh Sidhu and Manmord Sidhu. The film is written by Jass Grewal, the music is given by Jattinder Shah and is Directed by Amrit Raj Chadha. 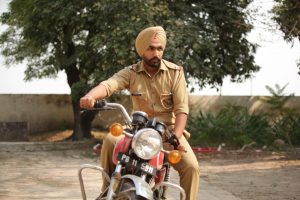 The Film Is a story set in early 90’s in a remote village somewhere in Punjab, revolving around a police officer who is popularly known as ‘SAAB BAHADAR’ among the villagers. Ammy Virk who seems to be enjoying his role throughout the shooting got a chance to overcome his fear and experience those things that he had never done before in life. There was a scene in the film in which he is chasing a man who is riding a bike, and when they both are riding, he has to remove the keys of his opponent’s bike and perform a drift stunt to stop the man. For him it was tough to perform the stunt in one take so he took rehearsals and there after completed it smoothly. This is an experience which he had never felt before and it came as a nice shot. Ammy Virk is enjoying current phase of his life, as from singer and actor he is now performing stunts in his films which will be a great delight for his audience to watch.

The film is a Mystery Thriller and is a making of Gunbir Singh Sidhu and Manmord Sidhu who have given successful commercial films like Jatt & Juliet part 1&2, Punjab 1984, Sardaarji part 1&2 and much more.”

The starcast of the film includes Ammy Virk and Preet Kamal in a lead role. The other cast comprises of Jaswinder Bhalla, Rana Ranbir, Seema Kaushal and Hobby Dhaliwal.

The audience will have a different experience watching this film as unlike other movies the audience would witness Mystery, Fear and Suspense for the First time in Punjabi Cinema.