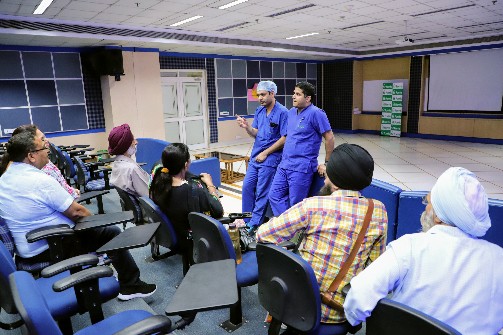 “Most of these patients are presented with acute onset swelling of the leg with extreme pain and an increase in temperature in local skin area. They were managed successfully either with medication and certain patients had to undergo clot removal and stenting of these veins. With treatment, these symptoms settled within two to three weeks. They were allowed to move around within 1-2 days. They are on blood thinners which are continued either for 6 months to lifelong. However, if not treated on time, then conditions like pulmonary embolism (clot in the lung), post-thrombotic syndrome and recurrence of venous thrombosis may be fatal,” Dr Jindal said while speaking about treatment of DVT.

The Deep veins are responsible for returning the blood to heart and lungs and these veins weaken in their functions of propelling blood over a period especially when a person is confined to immobilization. The veins may be partially or completely blocked by the blood clot causing DVT. “Mrs. Surinder Teer came with DVT and we treated her with medications, and nowadays she is doing well. Mr. Prabhleen Singh came with DVT & Haemoptysis. We placed IVC filter, which helped in curbing the menace,” added Dr Jindal.

Speaking about the most common risk factors Dr Jindal said, “Individuals after attaining the age of forty are seen with prolonged immobilization such as prolonged bed rest due to respiratory failure, heart failure, paralysis, after fractures, heart attack, trauma, abdominal, thoracic or neurosurgery and in cancer patients. Obese individuals with diabetes are more prone to become DVT patients with malignancy and smokers and those women who are on oral contraceptive pills are more vulnerable.”

“One should always investigate the cause of DVT and the treatment may be instituted accordingly. DVT is a complex disease and since the patient is different, the treatment has to be tailored according to the disease process,” concluded Dr Jindal.

The incidence of DVT in India as reported is one percent of the adult population after the age of forty and is 15 to 20 percent in the hospitalized patient and the risk of DVT is 15-20% in patients undergoing orthopaedic surgery particularly involving the hip and knee if prophylaxis not used.