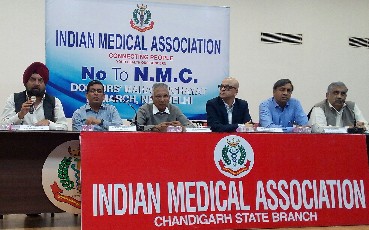 Government has introduced National Medical Commission (NMC) Bill to replace the existing Medical Council of India in an attempt to improve healthcare infrastructure of the country. However, Indian Medical Association, the official body of doctors of modern medicine is of the opinion that many provisions of the bill are ill conceived, not properly thought of implementation of NMC bill will result in production of half baked doctors, significant increase in fee of Medical Education and encourage corruption. In Fact it will be counterproductive and will lead to marked deterioration in Medical Services provided to the common man. NMC is against public interest in the present form and needs to be overhauled.

Prof. Bhushan Kumar, Ex HOD Dermatology PGI Chandigarh said  that  Exit examination   for  MBBS  students  will  lead  to  brain  drain from   the   medical   profession. Bright   students   who   at  present  compete to get admission to MBBS course will  now  look  for  other professions because  they  suddenly  will  realize   that   the   degree   obtained   after years  of   struggle   has   suddenly   been  devalued  because  similar  rights and privileges will be  available  to  AYUSH graduates  who  do  a  six  months  bridge  course.  The   Quality   of   training   of   doctors   will deteriorate substantially he said.  Dr  Ajay K Aggarwal , President  of  IMA  Chandigarh  said  that  IMA   opposes  the National  Medical  Commission  Bill in  its  current  form. To  highlight the   views  of  IMA  and  to  draw  attention  of  Press  and  public  to  the irreparable harm which will  be  caused  by  this  Bill  to  the  health  of  the  nation, IMA  Chandigarh  is  planning  many  activities  he  said. On  11th  March  IMA  Chandigarh  is  planning  to  do  a  walkathon at  sukhna  lake  at  7  AM  on  line  with  similar  rallies  being  organized  by  members  of  IMA  all  over  the  country. Dr Neeraj  Kumar  President  Elect  IMA  Chandigarh informed  that  IMA  will  thereafter  hold  a  Public   forum cum  press  meet  at  9.00  AM  at  IMA  Complex  Sector  35  B  Chandigarh  where  experts  will  enlighten  the  public  regarding  the  NMC  Bill  and  reasons  why  IMA  opposes  the  same. Dr  R  S  Bedi  Ex  Vice President  IMA  Headquarters  gave  many  reasons  why  NMC  Bill  should  not  be  passed  in  Parliament. He  said  that  this  Bill  is  undemocratic  and  usurps  the  Federal  structure  of  Indian  Constitution. The  Council  which  will  be  formed  under  this  Bill  to  replace  the  MCI  will  be  not  be  representative of  different segments  of  medical  profession  and  will  have  predominantly  handpicked  nominees  of  MOHFW.Dr  Neeraj  Nagpal  Convenor  MLAG  said  that  this  Bill  has  pure  financial  objective  to  benefit  owners  of  Private  Medical  Colleges. Summarizing  the  ill  effects  he  said  that  the  NMC  Bill  will

3)    Disincentive  for  development  and  promotion  of  Indian  systems  of  Medicine

Government Needs to relook into the controversial National Medical Commision Bill which had been tabled in the Budget Session of the Parliament and is now with the standing committee of Parliament on Health .

The Indian Medical Association has taken upon itself to create awareness among the masses regarding NMC and the ways it will impact the health of the citizens of this country.

More than 25000 doctors are expected to participate in this peaceful awareness campaign all across the country at the same time on 11/03/18 culminating with the MAHAPANCHAYAT at New Delhi 25/03/18 where, representatives of all branches of the country will participate in the rally . Memorandum will be prepared which will be submitted to all concerned leaders. Similar protests will be taken out all over the

country on 25/03/18 where doctors will submit memorandum of demands to local authorities. 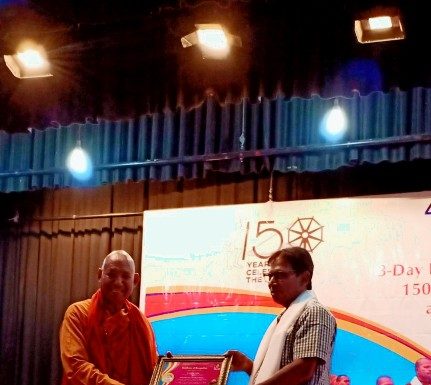 ORRA launches its First exclusive store in Mohali at 3B2