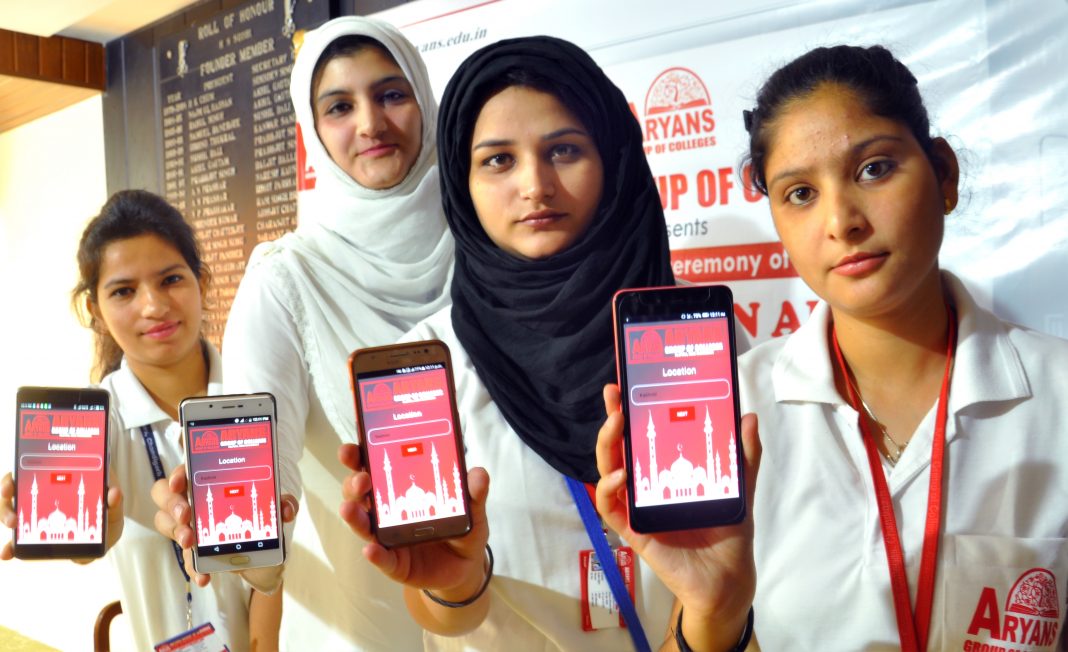 Once again the JK students of Aryans Group of Colleges, Chandigarh have come up with a new Innovative Idea in the interest of Muslim community of JK.

Developed by a group of four JK girls of Computer science branch of Aryans College of Engineering, an android based app of 3.0 version christened as “Ramadhan App developed by Aryans Group of Colleges, Chandigarh” would now help to solve the problem of Muslim community during Ramadhan for their fasting. The app featured an automatic alarm which would buzz in the morning at Sehar time to awake them and in evening at the Iftar time to remind them for their meals. The app is available on Google Play Store.

Tech students namely Mehwish Rashid & Bisma Parveen who hail from Srinagar while Pooja Safaya and Mansi Salaria who hail from Jammu have set a true example of Religious Beliefs, universal brotherhood and respect for the religion of each other by developing this app which would help the entire community for time Management.

Dr. Anshu Kataria, Chairman, Aryans Group told press that Aryans has always motivated its students for the innovations and work on live projects which could bring a revolution in them and the society. He said that Kashmiri students possess the instinct to work in this direction and hence they have always been supported for their ideas.

App to help in time management

Mehwish Rashid & Bisma Parveen while interacting with the media said, “As the computer science students we have tried to implement our knowledge to solve the problem of those Muslim people who find tough to match the variations in sehar time in the auspicious month of Ramadan due to various physical or biological factors”

Pooja Safaya and Mansi Salaria while speaking said that it was tough to work on such a big project for a large community in a short time period but we were fully guided, motivated and supported financially by the College Management without the help of which this project could be a dream for us. “We have developed this app in 72 hours. Though it’s a small initiative from our side but we aim to add Azaan prayer along with the alarm. In the beginning the app would work according to location of JK but in next few days it will work according to the location of entire Globe” students added.

It is to be mentioned that earlier to this, four major innovations done by Aryans students namely “Aryans Android App” in lieu to make campuses paper free, “Aryans Save Kashmir App” which was developed for the rescue operation at the time of floods in Kashmir, “ Aryans Life Saving Glove” developed to provide timely assistance to the people prone to the risk of cardiac disease, “Aryans Safety Helmet” to provide timely first aid facility in case disaster happens at construction/ mining/ industrial sites were launched and applauded at various Government Levels and gained interest of many people.

The only campus near Chandigarh having majority of JK students

It is worth mentioning that Aryans has emerged as a popular destination for the JK students. Aryans is the only campus near Chandigarh outside Kashmir having majority of JK students. Over 1500 JK students from various parts of Kashmir are studying in Aryans in various courses including B.Tech, Leet, LL.B, BA-LLB, MBA, BBA, BCA, B.Com, B.Sc(Agri), GNM, ANM, B.Ed, MA(Edu), Polytechnic Diploma etc.