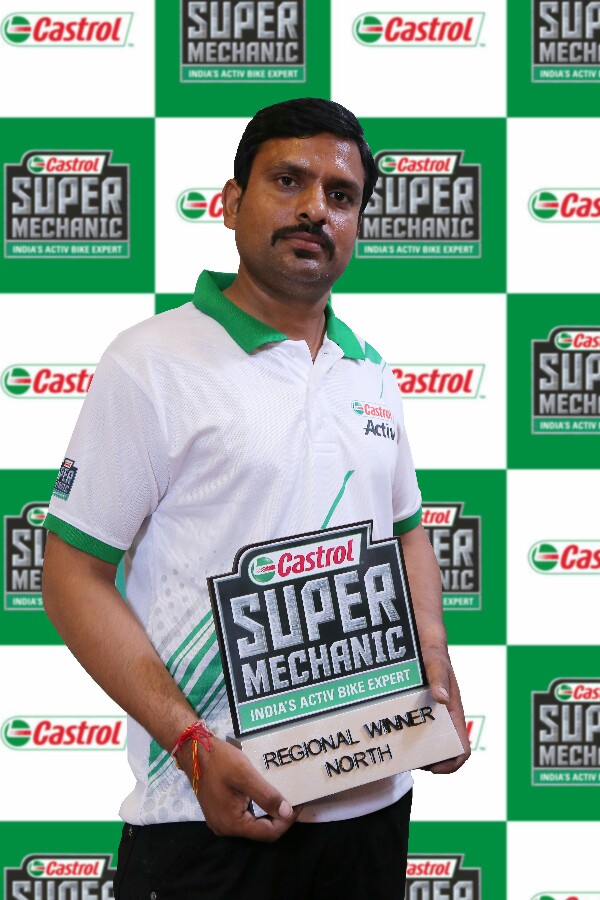 Rajesh Kumar from Chandigarh, Mangat Chandel from Ludhiana and Satish Kumar from Delhi emerged as the top three winners of the Castrol Super Mechanic regional round held in Delhi, and have qualified for the all India finals to be held in Mumbai in September 2017.

Commenting on his win, Rajesh Kumar said, “I’m thrilled to share the Castrol Super Mechanic winners’ platform with such experienced and senior mechanics. It was a great feeling to win this contest. This was also a useful session to enhance my knowledge and technical expertise.”

Castrol, one of the leading lubricant brands in India, launched the innovative and exciting Castrol Super Mechanic contest to provide a public platform for independent two-wheeler mechanics to showcase their talent and skill. Thousands of two-wheeler mechanics from across the country signed up to participate in the unique contest that commenced across India in May 2017. Following the registration, contestants participated in an initial round to qualify for regional rounds which will run in eight cities.

Over 150 mechanics participated in the exciting competition held in Delhi. The competition included a quiz round and two practical rounds which included a diagnostic and an assembly round. The competition was fierce and the level of skill and knowledge on display was of a very high standard. Besides the competition, all participants went through a technical training on two-wheeler engine technology.

Commenting on the contest, Kedar Apte – Vice President Marketing, Castrol India said, “We are delighted by the overwhelming response we have received for the Castrol Super Mechanic contest.Mechanics are our key business partners and we are delighted to provide them with a platform where they can showcase their knowledge and skills. We have also taken the opportunity to share knowledge and information with them about the latest trends and technologies in motorcycle engines, maintenance and lubricants. The regional rounds of the Castrol Super Mechanic contest will also provide participants with the opportunity to interact with fellow mechanics from other cities and towns and learn from each other.”