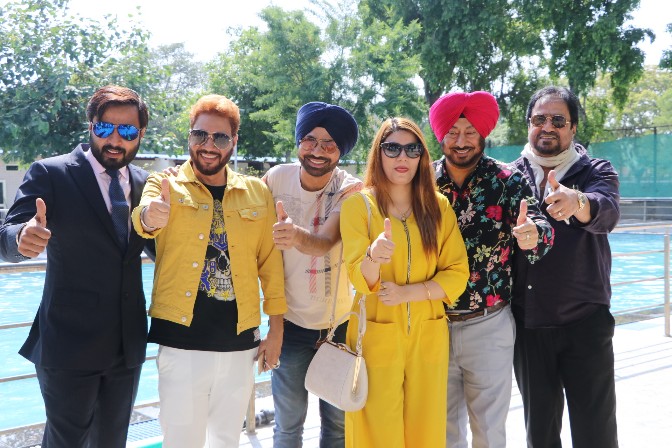 Talking to the reporters, the film team informed that not only the
storyline of this movie, but music is also very impressive. Every song
of this film will resonate in the mind of the viewers. Music director
Gurmeet Singh said that the movie is produced under the banner of ‘BRS
Films’, while it is directed by Darshan Bagga. There are total seven
songs in the film, which are penned by Maninder Kelley, Happy Raikoti,
Daksh Ajit Singh and Harry Bakna. Happy Raikoti has writer four songs.
The singers are Indrani, Maninder Kelley, Gurmeet Singh, Mannant Noor,
Rajveer Jawanda and Lakhwinder Wadali. The main roles are played by
Rajveer Javanda, Sara Sharma, Jaswinder Bhalla, Upasna Singh and
Harabi Sangha.

Producer Karan Agrawal and co-producer Dhiraj Bhandari said that it
was first Punjabi movie from their production house. It is an
interesting mix of romance, comedy and family drama. Audience will get
all the colours in this film. The trailer will be released soon. They
are hopeful that people will love the film and its music.

Singer Mannant Noor said that she has given her voice to four songs,
out of which the first song being released is ‘Saari Saari Raat’.
Rajveer Javanda is the so-singer. The song is writer by Happy Raikoti,
while Gurmeet Singh has given the music. Mannat Noor is hopeful that
like her earlier songs, the listeners will find this song melodious.

Present on the occasion, singer Lakhwinder Wadali said that he had
given his voice to a beautiful song ‘Tariya O Tariya’, which is penned
by Daksh Ajit Singh. Comedian Jasvinder Bhalla and Harbi Sangha said
that the audience will find them in totally different getup. They are
against each other. But, what is the reason for their competition that
could be seen only in the movie.