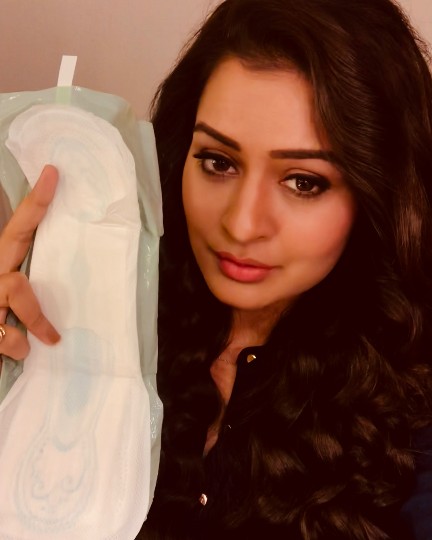 Akshay Kumar-starrer Pad Man has released worldwide today but its promotional activities are trending on social media. The #padmanchallenge which began from film’s inspiration Arunachalam Muruganantham, extended to the film’s team and crew has taken the nation by storm. Bollywood came out in full support for the social message and Pollywood is not far behind.
Punjabi entertainment industry took up the challenge and celebrities posted their pictures holding pads. The first post came from the leading lady of the movie ‘Channa Mereya’, Paayal Rajput.
Another lady who became a part of the social cause with aplomb is singer Sara Gurpal, whose latest track ‘Kash Koe’ is also a melody with message. The beautiful damsel posted a picture on her Instagram handle where she held a sanitary pad in her hand to break the age old conventions.
However, it is the men who came out and gave the right direction to the message. Punjabi singer, Rico, held the pad to make a bold statement. His post on Instagram was readily appreciated by his fans.
Award winning actor of short film Zubaan, Kanwalpreet Singh was seen holding a sanitary napkin on a photo he posted on his Facebook page.
Rico was challenged by VJ Vabby, the anchor of Gabruu.com’s much loved show, Gabruu Da Dhaba, who had also posted pictures with pad in his hands. The VJ captioned the picture rather meaningfully and requested his fans to respect the women.
Sara Gurpal had extended the dare to the famous Punjabi model Ruhani Sharma, who also completed the challenge with grace.
Pollywood supporting such crucial and significant causes is indeed a right road to trail on!