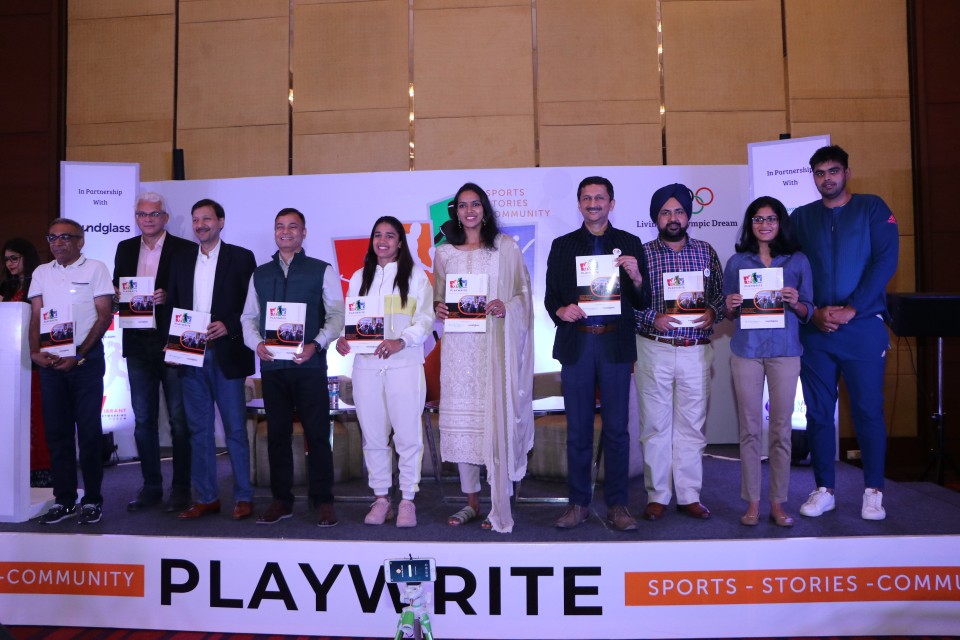 The third-edition of Playwrite, a premier Sports Literature Festival of India held at Hyatt Regency, here witnessed some scintillating sports discussions by veterans and youth alike amidst an enthusiastic gathering of sports lovers. OP Singh IPS Principal Secretary Sports, Haryana was the Chief Guest on the occasion.

The first session named Olympic Dreams was kick-started by one of the founders of Playwrite – Vivek Atray, a former IAS officer, a leading motivational speaker and an author. The session featured the star behind Aamir Khan’s movie Dangal, Babita Kumari Phogat, a renowned female wrestler, who won the gold medal in 2014 Commonwealth Games.

While narrating the stories of her childhood to a packed audience, Phogat remarked that hadn’t it for her strict father, she wouldn’t have become who she is and perhaps, been confined to the four-walls of the home as a shy girl.

“Dangal movie wasn’t an exaggeration. In fact, in reality, I and my sisters weren’t even allowed to attend family weddings by my stringent father, if they came in between our trainings. We had nowhere to escape to, when your own father is your coach,” said Phogat.

Reminiscing her past further, she also mentioned how she would often ask her mother as to why her life’s made so difficult by father. “My mother would just reply, “bas 2 saal aur” (wait for just two more years). This continued until I reached the place where my father wanted me to.”

Babita also talked about how people in her own village would taunt her and her sisters for wearing shorts and playing amongst the boys. “However, in such times, my father would just say – ‘You just do the hard work, leave everything else on me’”.

At Playwrite, Phogat was accompanied by her husband, Vivek Suhag, who’s a wrestler himself. When she was asked if her life changed in any way after marriage, she pointed to the fact that she’s really lucky to have found a husband like her own father who is extremely supportive to her.

The next session called ‘The Business of Sports” was conducted by Chitranjan Agarwal, co-founder of Playwrite and featured Joy Bhattacharjya, a famous sports quizmaster and a part of IPL’s Kolkata Knight Riders since 2008.

Bhattacharjya stressed on the importance of a parent’s role in shaping a child’s sporting career. One of the most interesting points he made was that even though most of us complain about India lacking sports facilities and infrastructure, yet what we lack the most is the interest of people at the basic level.

“Even great players like Ronaldinho have become great by starting to play in the streets only. What we really lack is enough passion for sports, in general.”

Bhattacharjya also talked about Sports League as a sustainable reality in India. He emphasized on the fact that anyone who’s interested in this field must know that making a sports organization, is a long-term business and something with a long gestation period. One needs to be prepared for working for about 3-5 years to reach the break-even stage.

With a lot of experience in creating leagues for different sports including Volleyball, Bhattacharjya said that in order that a certain sports’ league becomes successful, a lot depends on how it looks when played on the “Screen”. “For instance, Lawn tennis is visually appealing but table tennis doesn’t grab the same eyeballs on TV for it being an ultra-fast sport.” The major sources of income in leagues come from four main sources – selling satellite rights, gate tickets, sponsorships and sale of merchandise.

The third session called ‘Hockey: The 70s Show!’ saw the participation of hockey legends like Ajit Pal Singh and Ashok Kumar (son of Late Padma Bhushan, Major Dhyan Chand). The session was hosted by renowned senior journalist Prabhjot Paul Singh. The event had a surprise guest the great Hockey Legend – Balbir Singh Sr, who managed to make it even when he has not been keeping well since long now.

Ashok Kumar and Ajit Pal Singh were both part of the Indian team that won the 1975 Kuala Lumpur World Cup – the last Gold that Indian hockey team ever won.

Citing some of the reasons where Indian hockey team failed in repeating the success story of 1975, both the veterans pointed to the introduction of Astro-turf, which our players and including our authorities were not familiar with at all.

“Our grounds were uprooted and instead of grass, they covered them with cow-dung. They said, practice on this! This is how an astro-surf abroad would feel like,” said Kumar. They even said some weird changes were made in our team during selection process before important world events which led to further adverse performances. Ajit Pal Singh said humbly to the audience on an emotional note, “I really feel sorry that we couldn’t maintain the great Indian hockey glory.”

The fourth session was hosted once again by Chitranjan Agarwal who talked to Garima Rathore, Captain of the bronze medal winning Indian Ultimate Frisbee team at the Asia Oceanic Ultimate and Guts Championship 2019. Garima passionately talked about this relatively new sport that’s extremely popular in the younger generation. She explained various nuances of Ultimate Frisbee and mentioned that it’s a mix-gender sport and popular because it requires very little equipment. “Ultimate Frisbee is actively being played by around 10,000 players in India from across 20 states. It’s a mix of Rugby and Football and will be included in 2020 Olympics,” she said.

Another session on Basketball called Slam Dunk included participants like Jeena PS, captain of India’s women Basketball team that won the Gold Medal at the 2019 SAF Games. She has also showcased her skills in the Australian NBL1 League for Ringwood Hawks in 2018-19. She was joined by Suman Sharma, who’s also an international Basketball player and also, India’s first Basketball player to be awarded with an Arjuna Award.

This session was conducted by Ritu Nichani and discussed issues like gender pay-disparity, need for proper indoor wooden basketball courts in every school instead of outdoor concrete ones etc.

DalerMehndi roars for UP Yodhas; UP Yoddha anthem ‘Hum Hain UP...