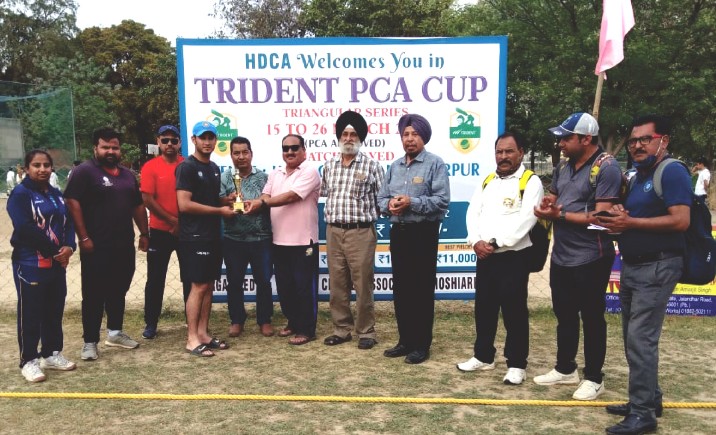 PCA Rest of Punjab Red won the toss and elected to field first. Batting first PCA Rest of Punjab Green were in trouble by losing first wicket in the 3rd over at a score of 10 runs in the form of its opener Ashish Malhotra (9 runs of 14 Balls ) and at one stage were 50/4 in 13.4 over’s. Three wickets haul for Punjab Team Red’s bowler Deepin Chitkara in his 3rd over put the batting team under tremendous pressure by sending back Karan Chawla (17 runs in 22 balls), Captain Ashish Ghai (0 in 2 balls) & Aman Ghuman (0 in 1 ball). However, some fighting knocks by Naman Dhir 35 of 61 balls, Talwinder Brar 30 of 20 balls and a late cameo of 40 runs of 64 balls by Harjot Dhawan, 30 runs of 48 balls by Daman helped their team to finish at 205 all out in 47.3 overs. For PCA Rest of Punjab Team Red, Deepin Chitkara 3 for 37, Abhishek Bajaj 3 for 55 and Jassinder 3 for 23 bowled well.

In reply, chasing the target Rest of Punjab Red opening pair of batsmen Vishwa Pratap & Nehal Wadhera (67runs of 68 balls, 6 four, 2 six) stitched a partnership of 77 runs in 15.4 over’s and gave their team a good start. Kashish Pasneja 28 of 38 balls, Kuwar Pathak 30 of 60 balls, Deepin Chitkara 20 runs of 18 balls and Salil Arora’s unbeaten 19 runs of 25 balls helped their team achieve the target in 44.5 over’s and wining the match by 4 wickets. Nehal Wadhera of Rest of Punjab Red was declared the Man of the Match.

Live scores of the matches played in the TRIDENT PCA CUP 2021- Triangular Challenger Series are also available online at https://cricheroes.in/tournament/235800/Trident-Pca-Cup-Triangular-Series